In which I go a little Brazilian, but this time it doesn't hurt

Let me tell you something about winter in Chicago: it is not looking half bad.

This occurs to me about halfway to the bottom of the Ultimate Seduction, a strawberry-rosemary-basil-sake-cachaca concoction that bartender Richard Tandoc has whipped up just for me from behind the bar at the Encore Liquid Lounge.

Tandoc, of the New Jersey Rio Rodizio Brazilian steakhouse,  and five other VIP "mixologists" from around the country are hoping to convince a panel of judges that they have created the ultimate cachaca cocktail in the Cuca Fresca "Shake Your Way to Brazil" North American Mixology Contest. 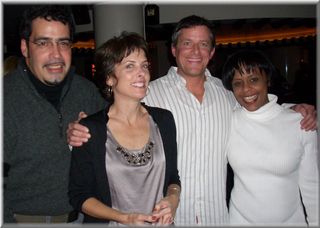 What am I doing here, other than drinking like a pirate?

I am the guest of Paul Abercrombie, whose book, "Organic, Shaken and Stirred" (Harvard Common Press; $19.95, liquor not included) has become the bible of the organic-cocktail imbibing suburban mommy set.  Or at least, that is what we are planning as soon as my copy arrives in its organic, free-range, Earth-friendly packaging. Paul has to judge the entries, whereas my only job is to try to finish as many as possible.

Cachaca - pronounced "another please" - is an organic Brazilian specialty rum. As the handsome Cuca Fresca representative explains, cachaca is made from a completely different part of the sugar cane than other rums, which are made from some other part, which gives it a completely different something, something, something. It is not easy to take good notes when your hands are full of rum drinks.

Whatever it is, I can tell you this:  it tastes very nice mixed with ginger liqueur, oranges, limes, blackberries, rosemary, allspice, passionfruit, ginger beer, something called Domaine de Canton, hibiscus rooibos tea syrup, egg whites and everything else they shook, stirred, poured and muddled into it.

If this was Brazil's idea of an apology for that afternoon at the S&M day spa, well, I was going to accept.

My favorite was something called Ginger Dream by Los Angeles rum artist Francois Vera. I knew the minute I tasted it that he came from someplace where creative types gather under palm trees. It was my kind of drink; all sunny and gingery and full of pulp. Not too sweet.

Later, I mingle with Chicago's celebrity bartenders and learn how to make homemade bitters. Which seems like a really good idea in the glow of Rico Wisner's Punch from Ipanema, the judges' favorite. Will I actually try this at home? It is hard to say. Sometimes pulling the cork out seems like too much work.

Anyway, my point is this: Brazil, you are forgiven.

Honestly, I don't think this comment really needs anything else.

You look a little suspicious in that picture. Is the guy behind you goosing you or are you just really drunk?

Awesomeness. Liquor is thy name...

Silly, you can't get drunk on organic cocktails. You just get a little green and self-righteous.

I was there too! Did we meet? Not sure.

Anyway... Posted all about it here:

Yes, we did Phil. You called me "one of the most fascinating mommy bloggers you had ever met at a bartending contest." Sad to think it was just the rum talking...