Two roads diverged in a wood but only one of them had color-coded trail markers. Shouldn't that have made all the difference? 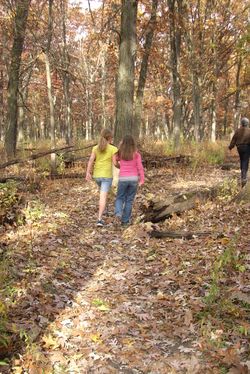 We have walked for miles through the yellow wood following a trail we expect to loop back to its starting point but which deposits us beside a highway instead.

This does not surprise me. This is the sort of thing that comes of venturing into the forest without a plan, a map, a first-aid kit or a 20-pound bag of rice.

Considering the list of all possible outcomes, having to retrace our hike to get back to the car is about the best we could hope for.

Our scoutmaster does not put much stock in things like "plans," "maps" or bags of rice. He relies on manly intuition and his sense that things rarely go wrong, and when they do, are rarely fatal.

This is known as the I haven't killed anyone yet school of risk assessment.

And so we set out for a day of exploring the woods with little more than the scoutmaster's assumptions about where the trail will lead. We are accompanied by two sixth grade girls who alternate between running too far ahead and lagging too far behind. They laugh, they hide, they send text messages back to civilization.

The trail winds through thick woods in autumn colors and is crisscrossed by horse paths. A couple 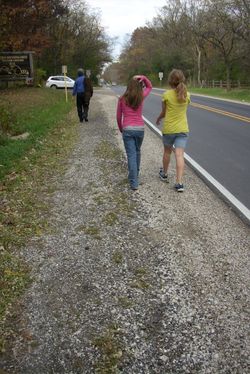 of deer amble past. It is a nice walk. But after a few miles we pick up our pace, eager to reach what we believe is the end of our hike. Except it's a highway. A forest preserve worker at the nature center across the road gives us a map and tells us to head back the way we came.

We head back the way we came. I'll be honest; it's not as pretty on the way back.  There are an awful lot of dead leaves. Where did all this horse poop come from? I make a prediction: "At some point, the scoutmaster is going to announce that he has discovered a shortcut," I tell the girls. "We must not, under any circumstances, take the shortcut."

The girls look at me but all they hear is shortcut.

We are not even 20 minutes back into the wild when the scoutmaster pulls out the map and brings us to a halt at a fork in the trail.  An unmarked path branches to our left.

"I think this will take us back to the parking lot," he says. "We won't have to go all the way around."

"No," I say. "There are no trail markers." But no one can hear me. They are already skipping down the unmarked path.

There is nothing to do but follow. I know how this is going to end. "It is going to be a long walk back," I say. The scoutmaster knows too. "Trust me," he says. Again? I think.

But we are both wrong about what we will find at the end of the trail. Because the right answer, as it turns out, is a bride on a Harley.  Also, the parking lot. 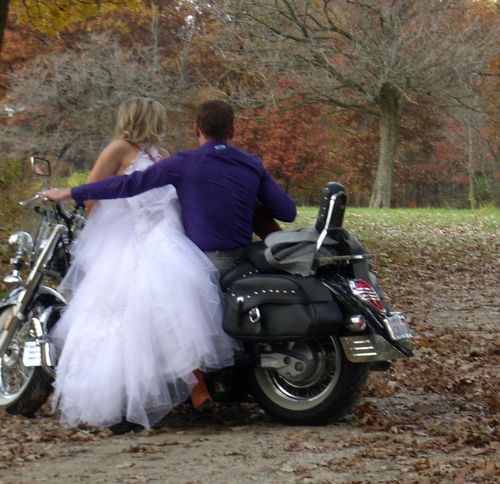 Only one week left till Halloween

And we're ready to head out in fairy green

It's not like us to be prepared so early.  But the sixth-grader settled on her costume early this year, abandoning the Goth trend for the shimmering green optimism of a storybook fairy.

We buy a costume online, find shiny green shoes to match and head to Claire's for glitter-covered accessories.  The 14-year-old will panhandle for candy as himself.  No purchase required.

I unpack the skeleton hand goblets and offer a toast to my perfectly-organized self.

This is what is known as tempting the Fates.

The Fates, as anyone familiar with Greek mythology knows, are the social studies, language arts and science teachers whose creative whims control the lives of mortal parents from kindergarten through eighth grade.

Next Thursday, the Fates have decreed, will be  "Dress Like an Egyptian Day."

Lucky for us, the Egyptian god Ak-tut-something is pretty much a ringer for Tinkerbelle.

Okay, that is not true and the girl knows it. We have absolutely nothing useful for depicting anything remotely Egyptian. We are back at the costume store to check out our options.

But we've only got a few days more (oh way oh)

We reject Cleopatra. Too expensive, I say. Too obvious, says the girl. Duh.

As a recovering Goth, she likes the look of Anubis, the jackal-headed god of the dead.  We are not going to find Anubis here.  But a $4.99 Batman mask seems like a good start.

All we have to do is build a cardboard snout, lengthen the ears, add the side flaps, papier maché the entire thing and paint it black and gold. Then we will fashion a tunic from an old bed sheet. We will fashion Egyptian looking accessories from beads and strips of cardboard.

Photos: Top right, Anubis mask from fantasyguilde, $275; bottom right, we are halfway there... You'd be amazed at what a body can accomplish on a diet of pizza and frappuccinos.

The 14-year-old, whose workout regimen until recently was fours hours a day of texting and television, is suddenly sporting six-pack abs and serious looking biceps. Overnight, practically, our skinny little boy has grown a man's body.

Which is useful for carrying in groceries and hauling up boxes of Halloween decorations from the basement.

But it is, I fear, the beginning of the end for another Halloween tradition in our family: the October mortgage payment.

Since they were no bigger than pumpkins themselves, we have always allowed them to bring home the biggest pumpkin they could lift. It was adorable, watching them as toddlers, straining under the weight of an affordable seasonal squash.

When they got a little bigger, we changed the rules to require that they also be able to carry it off the patch. Kindergartners are stronger than they look. It was getting expensive.

Still. You could budget for it.

We never imagined they would beginning training for it.

Earlier this year, the boy, whose previous interest in sports amounted to a couple of seasons of Little League and a high-scoring streak of iPod bowling, joined the swim team. His interest in food grew to include more than mashed potatoes. Next came the pull-up bar in his room.  Now we are in serious trouble. Even the girl has been doing push-ups. 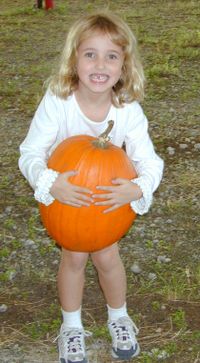 But I will treasure the receipts forever

It seems like only yesterday he was learning to tie a tie for the very first time.

But in fact, it was about three months ago and that tie? So last week.  So boys department. This time we are headed to menswear. The grown up stuff. At grown up prices.

But it's got to be perfect. This isn't some middle school orchestra event we are preparing for. This is the high school homecoming dance.  You only do this once right?  Or at least no more than once a year for the next four years. Not counting college.

He's got a date. I've got a credit card and all the fashion know-how my Esquire subscription can impart. Boy, Esquire is almost friendly as we prowl the aisles, trying on sport coats, pairing ties with dress shirts.  He favors a black jacket, red shirt combination.  Gangsterish, I tell him. "Cool," he says, reaching for a fedora to complete the look. "No," I say. "Not cool."

We settle on a burgundy shirt and a dotted tie. He has black pants at home, so the bill comes to only about a week's groceries.  When we get home, we discover last year's pants don't fit and his date will be wearing pink. The burgundy shirt and tie combination is suddenly all wrong, we are back in menswear and we realize we need a belt as well. I have enough receipts in my purse to kindle a reasonably-sized fire. But the memories - priceless.

I mean, just look at him: 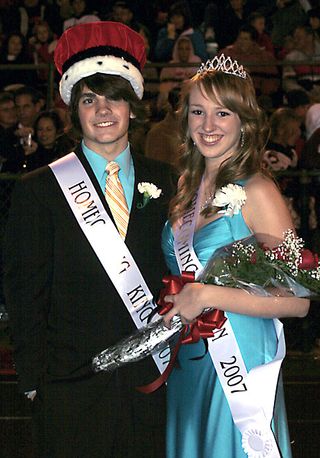 Okay, this is actually someone else's son. When I told my son I wanted to take a picture, he reacted as if I had asked him to save me a dance. Which killed me, because he looked so handsome and grown up in the grocery money clothes.

At least I imagine he did. He snuck out to a friend's house where they were all meeting up before the dance to take pictures.  For their Facebook pages.

Here is the picture I got: 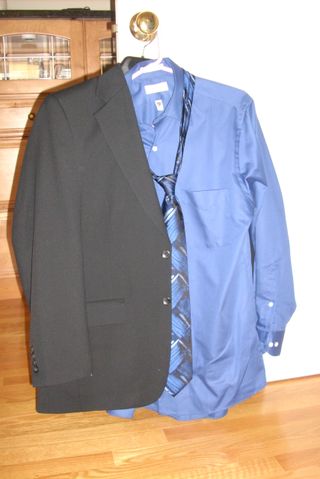 Related adventures: Payback is your mother, We have ways of making you talk 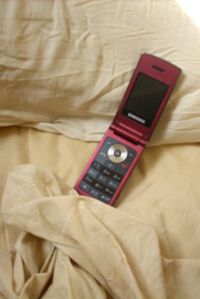 One third of Chicago residents prefer their cell phones to sex

Sadly, nobody thought to ask them which cell phones they were using.

And towel usage is at an all time high

I've just submitted the short story that will win the 13th Annual Zoetrope All-Story Short Fiction Contest and make my name as a writer of something other than lawyer news and a little-read sex and laundry blog.

I will not be caught off guard by the attention. There is no playing the ingenue at this point in my life. I am rehearsing for my interview with Terry Gross. You do not want to come up short on Fresh Air.

TG:  What was the genesis of the prize-winning short story "Leftovers"?

SK: Well Terry, I guess I would have to say it grew out of the bitter, overly-caffeinated  anecdotes we used to toss around like canapés at my weekly playgroup gathering. 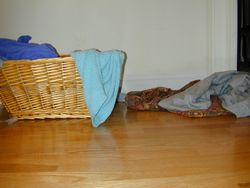 TG: You tossed canapés? Wasn't that kind of messy?

SK: I was speaking metaphorically Terry. It's a literary device.  And yes, it was messy.

TG: Speaking of metaphors, how did you come up with the idea of food storage as analogous to the soul-killing stew of stifled ambition and stale marriages that is the hallmark of suburban life?

SK: Soul-killing stew? That's a little over the top don't you think?

TG: I'm quoting from the story. Those are your words.

SK: Oh my god. Did I write that? I am going to be savaged.

SK: No, it didn't. This is an imaginary interview, remember?

TG: Yes, but that was the premise.

SK: Premise or not, soul-killing stew is not the kind of thing you can serve up to the literary types who judge these things. Bouillabaisse, maybe...

TG:  But it's parody, is it not? I mean all those allusions to airless plastic containers...

SK:  Shallow wordplay will not rescue a soul-killing stew. Though, I will say, I don't know of any writer who takes it further than I do. Or is it farther? I can never remember which is which. Or who is "whom." Though now that William Safire is gone, maybe we can all relax a little.

TG: (Laughing)  That's true. My guest is Suburban Kamikaze, whose short story "Leftovers" is the product of months and months of effort, despite being less than 4,000 words from beginning to end. Nick Hornby wrote and published two novels and a screenplay in about as much time.

SK:  Well to be perfectly fair Terry, I doubt Nick Hornby does as much laundry as I do. I know for a fact Pete Dexter doesn't. Towel usage is at an all-time high in my house, though what accounts for it I cannot say. The investigation is ongoing.

TG: Yes, well, please keep us updated on that. I'm afraid we're out of time.

SK: We're all out of time Terry. Only some of us are also out of laundry detergent.