« My heart is a ripe red tomato | Main | Make no little plans: carry no little purses »

I am sitting outside with the New York Times and my first cup of coffee when the sixth-grader and her sleepover co-conspirator come sidling up, all smiles and pleasantries.

"Good morning," they chirp. "We have the best idea."

If there is a better idea than drinking coffee and reading the Book Review on the deck on a Sunday morning in September, I do not know what it is. 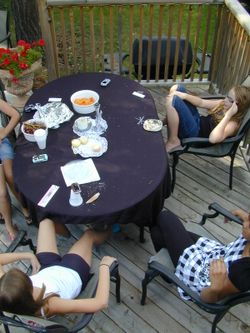 But the sixth graders do not share this view.  They want to throw a party. Today. They will ask "just a few" other girls to join them. It will be a black and white themed party.  Pretty please.

Mr. Kamikaze is shaking his head before they have even finished. "Ugh." he says, envisioning the worst case scenario for a Sunday afternoon.  But as anyone who has read my book -  The Unrealistic Underachiever's Guide to Ambitious Last Minute Theme Parties - knows, I am an unrealistic sucker for ambitious last minute theme parties.

Besides, I couldn't help but wonder, What Would Truman Capote's Mother Do?

"Would you rather they sit inside all day and watch t.v.?" I say, giving Mr. Kamikaze a pitying look that says you don't know anything about encouraging creativity in children.

Then I extract three promises from the girls: 1. The party will be outside, rain or shine 2. No more than 3 or 4 girls and 3. They will handle all preparations and clean up by themselves.  They unanimously approve the terms. Then they ask me for help with black and white decorations, snacks and games.

Mr. Kamikaze gives me a look that says I can't believe you fall for this stuff every time.

This is the sort of skepticism that has earned him a box full of prizes for investigative journalism.

These girls are not even old enough to vote, let alone run for office. And parenting is not journalism, despite the similarity in hours and pay.

At  6 p.m. all but one of the girls is still here. They've moved inside where they are playing dance music and opening cans of soup. A boy has joined them.  I shoo them back outside where they run around shrieking and giggling and showing no signs of imminent departure. We play guessing games - Am I a zebra? - until our list of black and white objects starts veering into the existential. Am I nothing more than light, refracted and absorbed?  Paper cups are shredded into confetti and scattered around the deck.  "Who made this mess?" I say. They finger the one girl who is not here. Smooth. Later I put a stop to a game of beach ball played between the second floor windows and the driveway.  Because someone could get hurt. Also, the beach ball is yellow.

But for the most part, it is a fine and trouble-free day. What's black and white and probably won't get read this weekend? Who cares?

Posted at 06:56 AM in Girl Kamikaze, What Passes for Parenting | Permalink

This is exactly how I feel when a reporter knocks on my door, like what just happened to me recently, asking about stuff. After reading the article the next day I remark, “Well, it could have gone better, but on the other hand, it could have gone a whole lot worse.”

Umm, my copy of your book The Unrealistic Underachiever's Guide to Ambitious Last Minute Theme Parties seems to be on back order. Can you send me a few tips? I have a sweet 16, a happy 18th and a graduation party to throw in the coming year. I'm planning to do it all last minute.

Are you sure you haven't read the book? Because you are working right off the list: 1. Over-commit 2. Wait until the last minute, then commit to some more. 3. Up the difficulty factor with added complications. Why not? It's not as if it won't be chaos anyway. 4. Send me an invitation. I'll bring the wine.