This week in Post-it notes 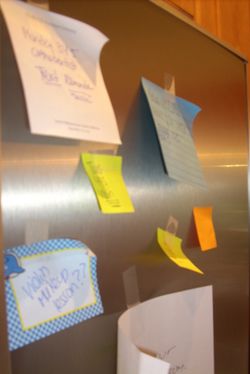 "The Post-it system isn't working for me," I complain to the last woman in town to whom I should be complaining about the difficulty of communicating with adolescents.

Still, the middle school principal does not throw me out of her office or cackle derisively when I tell her about the Post-it note art installation I left behind to keep the household running smoothly while I was in New York.

She doesn't even roll her eyes when I share my astonishment at the failure of all those little colored squares to prevent missed orthodontist appointments or forgotten violin lessons.

It is a little like complaining to a taxi driver about traffic.

Even so, she graciously declines the "duh" to which she is fully entitled.  It is startling how long it has taken me to figure out what the middle school principal, the violin teacher, and probably the orthodontist as well - have known for a long time:  Children between the ages of 11 and 16 cannot see Post-it notes.  Not even the ones in flourescent tropical colors or shaped like hearts and stars.  They are completely invisible.

In fact, paper is among the least effective means of communicating with children of this age, unless you are willing to write your reminders on the face of U.S. currency in denominations of $5 and up.

"Maybe you could try setting up a text reminder on his phone," the violin teacher suggests, after the ninth-grader misses another lesson, despite a glaring yellow sticky note placed at eye level on the door of the refrigerator, which he will open and close a dozen times in the space of time designated for his violin lesson.

But, not surprisingly, it is the middle school principal who knows what is called for: "Owls," she says.

She is exactly right of course. Take away the sorcery and Harry Potter's Hogwarts School is just another junior high, where no amount of magic can restore potency to a Post-it tucked limply between a peanut butter sandwich and a bag of chips. But a Post-it note tucked into the talons of an owl? That is a system we could really use.

Posted at 09:30 AM in What Passes for Parenting | Permalink

That's the same phenomenon as the grocery list that never makes it to your purse. If I had a nickel for the number of times I have had to receive about 8 text messages to get the whole list...I'd be filthy rich because I never remember the list. I've even moved it off my purse to pick my purse up to leave and left it behind.

So basically what you are telling me is that the constant repetition of things like "put on your shoes" and "eat your dinner; don't play with it" doesn't end when they get old enough to read? We just remove those notes from our voice to our post its, and they still get ignored? *sigh* This does not make me look forward to my children outgrowing preschool.

Like making a grocery list, or grocery shopping in general, crafting reminders on Post-it notes is an example of something that seems like a good idea, but is really a waste of time and yellow paper.

First of all, the AP has left the building. "Owls?" LOL! Secondly, if you don't text it or FB it they won't get it. And even then you cannot post as Mom. I'm still trying to figure out why they don't let the video game designers teach school. They know what kids listen to. Grand Theft Algebra II coming at ya!

Or maybe just the talons. :)

The notes are a fine idea, but it's WHERE you post them. Bossy is thinking foreheads are a very good idea.

Off to the hardware store to buy cans of spray paint. Color-coded...

I think gas stations have the right idea. Everything you want (like the key to the bathroom, OMG HURRY) must be attached to something you don't want, like a wheel from a '74 Nova. The key to unlock your cell phone from the '74 Nova wheel is at your violin teacher's studio.