Milkmaids and man candy in Manhattan

"It is so nice," I confess to the Executive Suburbanite during an afternoon at the Metropolitan Museum of Art, "to be able to walk through a museum like grown-ups, stopping to read and absorb."

Her back is turned and she is absorbed in her attempt to capture the image of a giant wooden penis with her iPhone, but she knows exactly what I mean. 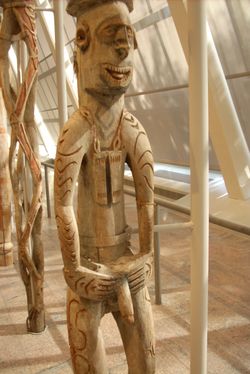 As parents, there is enormous fulfillment in the experience of trotting through these temples of learning and culture behind a pack of children who race from exhibit to exhibit as we speed-read and recite fun facts across the widening breach of marble floor.

"THE GORILLAS OF WESTERN AND CENTRAL AFRICA," we call out to them, "GET ALL THE WATER THEY NEED FROM THEIR MOIST DIET AND..."  - and here we pause to heighten the dramatic impact of the knowledge we are about to impart - "HAVE NEVER BEEN SEEN TO DRINK IN THE WILD!"

But, oh! To be without them in New York City, doing what grown-ups do, at the pace of grown-ups, in grown-up places.

There is nobody rushing us along as we contemplate anything we feel like contemplating, from the habits of gorillas to the cultural achievements of the Asmat people, whose carved representations of their male family members are a tribute to the concept of endowment as the lifeblood of a great museum.

We take many pictures.

Later, we walk through an exhibit of paintings built around

Vermeer's shamelessly provocative portrait of a woman pouring milk from a pitcher while engrossed in a fantasy in which she, Daniel Craig and Hugh Jackman swim naked under a milky-white moon. I am not making this up, entirely.

From the exhibit: "For at least two centuries before Vermeer's time, milkmaids and kitchen maids had a reputation for amorous predispositions."  It is speculated that she is dreaming about a man, who may or may not have been swimming naked, but it is the kind of thing that clearly invites further speculation of a grown-up nature.

On the other hand, there is Daniel Craig and Hugh Jackman in the flesh, in the milk-white glare of a hundred flashbulbs as we stand outside the theater following a performance of A Steady Rain.

Craig and Jackman are first rate as a pair of Chicago cops whose dysfunctional relationship plays out in a series of escalating tragedies. They are so good that for 90 minutes I completely forget to picture them naked. Luckily, the Executive is on top of it. Having seen the play four nights earlier, she waits for me outside the theater door to secure our place in the line of women squeezed up against the police barricades waiting for the two stars to come out and have sex with them. This is what is known in the grown-up world as theater appreciation.

The real cops are making fun of us.

"Move back ladies," an officer calls out. "I've been here every night and he hasn't yet proposed marriage to anyone."

Hah.  No one is looking for a marriage proposal. We're all grown-ups here.

Photos:  Man candy at the Met

Posted at 04:36 PM in A little English, Postcards | Permalink

Those of us who are art connoisseurs know that it is just another bowl of fruit....

Sometimes you see things in New York you didn't expect.

I'm sure when you were done, you would make a carving in tribute to his ummm...familial endowment. Or at the very least a clone.(http://www.SexualWellBeing.com/CloneAWilly)

Oh, how I've missed reading here. It's nice to be back in blog land. (Btw, I want on that school supply cocktail train. If I invited you to a party that served Kindergarten Playgrounds (chocolate martinis, but the brave dust the rims of their glasses with sandbox crumbs), would you come?)

As for the museums and art, it's all very well to do those things with other grown-ups, which I'm sure is very nice and edifying and cultural and all that. But I hope there is some shopping going on that doesn't involve having to take young children with you into dressing rooms. That's really the icing on the Big City Solo Trip cake, in my book.

You will be the first stop on my Midwestern Martini Tour.
And yes, I put in my time on Fifth Avenue, read Moby Dick on the steps of the Natural History Museum, drank margaritas in Rockefeller plaza and watched Jude Law make "Hamlet" seem too short. I love New York.