The best six days of his life

Flight 988 touched down at Chicago's Midway Airport just after 7 p.m., ending what had been the best six days of his life.

I know this, because he tells me, right after I catch him dropping a bag of Doritos behind the couch to conceal the fact that he has been 1. eating in the living room and 2. eating from the bag. 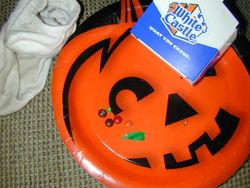 When I remind him for the 988th time that this is not allowed, he launches into one of the outbursts that passes for communication with a 14-year-old. "Why did you even have to come back? Everything was fine until you came back. It was the best six days of my life."

The best six days of his life included a lot of snack food, apparently, and nobody telling him where or how he could eat it.  There are confetti-sized wrapper shreds in the living room and Pop Tart shards under the chair in the office.  And that is just the preliminary survey.

Not everyone missed me while I was in Florida.  That much was clear before I had unpacked my suitcase. And the next six days of my life will include a lot of vacuuming.

It is not going to be pretty under the couch cushions, I can tell you that. There are things under there that will astonish me despite a household track record for upholstery debris few fraternity houses could match.  I could elaborate, but that is already two sentences more than anyone should ever write about vacuuming or couch cushions.  One more and it will start to emerge as the theme.  And I am saving that for my memoir.

The point is, I really did not miss him that much either.

Photo:  The variety and volume of objects lurking beneath the upholstery never fail to astonish.

Posted at 10:51 AM in This Week in Suburbia | Permalink

I have nothing witty to say -- but I do have sympathy for the state of the under-the-cushions. And for the cutting comments.

You vacuum under the couch cushions? You guys need a dog

Time for a little couch cushion detente. Move the TV to a family room (that I order you to create) in the basement. Voila! no more Doritos down the sofa. No more drinks on the hardbacks. No more half-eaten candy on the carpet. You get your room back. Then find something you both love doing, like eating and do it together, just the two of you, at least once a month. That should do it. I accept Visa, Mastercard and home made Tapas from your kitchen...

Perfect. We will reward him by creating a room just for him, where he can continue to cultivate the very special charm of teenage boys raised in front of television screens in basements. If only you had a daughter, I would begin planning their wedding this very minute...