« Is it love or just interest? | Main | The mother of invention »

Because you can't throw underwear at the symphony 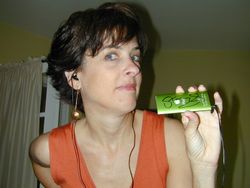 For years we had to content ourselves with nothing more than longing looks cast over the heads of a thousand strangers.

From Miami to West Palm Beach to New York, I could only look on from a distance insurmountable by all but the most creatively launched underwear.  He could see nothing past the first few rows.

But I never gave up hope that one day I would be close enough to hurl my own underthings onto the stage where he would scoop them up, admire the rows of pink and blue bunnies and squint into the crowd in the direction from which they had flown. A connection would be made.  A song written.  A bathtub filled. Something like that.

Years went by. The last time I saw him was in Miami. He was so far away I had to use the binoculars to see him on the big screen.

Then last night, with very little warning, I found myself practically holding his hand.

It began with a broken blender. Defying all expectations that winter would continue forever, a patch of sunlight had appeared in Chicago over the weekend. But in my enthusiasm for making mango Margaritas, a blender was shattered...

Me: "Do you have any applications for middle-age groupies? Because  I could really use a job."

I am just kidding. It actually went like this:

Me: "Have you ever signed an iPod? I have a Sharpie."

Handsome English Rock Star: "Sure."  He takes the iPod and the Sharpie, holds the pen out for me to pull the cap off  (rock stars do not uncap their own pens, apparently) and signs with a flourish that covers the entire back of the iPod.

He points to a teeny little space in the corner. "Tori can sign here."

I am not sure how Tori is going to feel about this.

Later I take this picture: 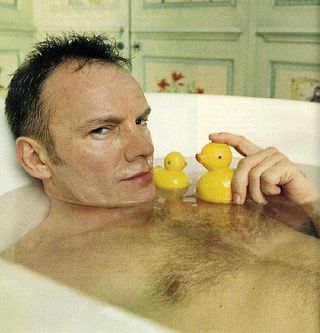 I am joking, of course. We are just good friends.

Posted at 09:00 PM in A little English | Permalink

Ok, my computer screen is kind of small so I didn't see the picture until later. So I was thinking you were talking about Tom Jones (King of Hurled Underwear). Now I can stop fighting the nausea. All better.

Well I'm sure he is a very nice man. But my iPod is spoken for.

I need a few more i's dotted and t's crossed. Broken blender to symphony? The musicians are so poor they have to moonlight as small appliance repairmen, thus you found a blender repairman who gave you tickets to the symphony and invited you backstage?

The blender was shattered. There was nothing left to repair. I had to borrow a blender.

I want to bite your neck. How's that for a groupie?

That's what he said.

In the version I am embellishing.

I'm using my imagination but shattered blender to Sting does not seem a direct path. Were you and Sting's Roadie both reaching for the same blender at Costco and noted that you both had S-T-I-N-G tatooed across your sweaty (hence the simultaneous blender accidents) palms? Were you stealing a blender backstage at the symphony because in the post appocalyptic world that is Chicago there were no more blenders left in the bunkers at Macy's? What?

Hope Mr. K is up for the competition.

I heard him say once that 7 hours includes dinner and a movie... He's funny too! Still, he's no Mr. Kamikaze...

I would fill in the blender-to-backstage details, but these versions are so much better.