« Tricking your husband into buying a vacuum cleaner on Mother's Day: priceless | Main | Is it love or just interest? »

A rabbit runs through it 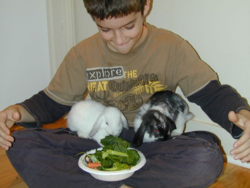 There is no clear line between religion and fly fishing in our family either. We engage in neither on account of a low tolerance for rituals and getting up early.

But that is not to say we do not feel keenly our sense of connection to the natural world.  And by "natural world"  I mean pet shops mostly.

Whether it was the earthworms they kept in a coffee can until the stink drove us from the house, or the $5.99 hermit crabs peddled in South Florida shopping malls, we have always encouraged our children to indulge their love of nature. "Go pet the neighbor's dog," we tell them.

Our home, meanwhile, has been a zoo of short-lived creatures that can be captured in the backyard, purchased for less than the cost of their little habitats or returned to the classroom first thing Monday morning.

There are some parents, parents whose fancy Turkish rugs will forever smell of cat pee, who take this as evidence that we are not fully committed to the full parenthood package, complete with  dog, cat and minivan.  "Why don't your children have any real pets?" they say. "What is that smell? I answer. "Is that the rug you brought all the way back from Istanbul?"

They are the same kind of people who insist that sending the kids to grandma's for the summer does not constitute a family vacation.

If I am not mistaken, Grandma is family.  Does a jar full of ladybugs make you any less of a pet owner? 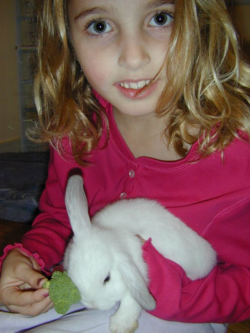 But as anyone who has ever been too chicken to light a cigarette in the pediatrician's office can tell you, peer pressure is a bitch.

And so about 48 lifetimes ago in ladybug years, I said yes to two pet shop bunnies.  It would never have happened if I had said no to the second Chianti at dinner, but my husband, who had only recently ruined my life by accepting a job in Chicago, was still in his penalty phase and made no effort to veto my impulse. It was a decision that violated every criteria I had established for pet acquisition: nothing that eats its own poop, sheds or can outlive the children's interest in caring for it.

Of course it was a mistake. But the photographs! Somehow, I had neglected to take any photos of the kids with their crabs, but here was unmistakable evidence of our parenting bona fides.  Look there, hanging just above the fireplace, little bunny Christmas stockings!  Someday the children can look back and not even remember not having a puppy!

And for the most part, the bunnies managed not to sabotage the stylish, no-fuss suburban lifestyle I had carved out for myself among the Stepford pooper scoopers. I was not being dragged behind a leash in subzero temperatures or cleaning cat vomit out of the upholstery.

Two summers ago, one of the rabbits died under almost perfect conditions. It was sudden and the children and I were out of town. It was relatively trauma-free and the service was lovely.

So yesterday when we discovered that Pepper the Bunny had developed some sort of strange lurching, head lolling ailment, I was completely unprepared. We had no veterinarian and no idea what was wrong. I googled bunny symptoms. I searched the Internet for rabbit hospitals. I tried to reassure my crying daughter that I knew what I was doing, but I felt just as incompetent as the time my 3-year-old son poured a jar full of tadpoles into his Hundred Acre Wood playset.  Should I wrap up the bunny, head for the nearest small animal hospital and pay hundreds of dollars for emergency treatment for a $20 pet shop rabbit that would probably die anyway?  Fill the sink with water and submerge the playset or try to pick them out one by one?

Luckily for me, not all of my Chianti-induced impulses have been wrong:  their father knew exactly what to do. "Get in the car," he said. "It's not about the bunny. It's about the kids. It's worth the money for them to know that you tried to save a pet they loved."

Four prescriptions and $200 in veterinary services later, I am pretty sure he got it right.

There is of course, some sort of formula by which such reasoning could shift at various price points.  But don't ask me to do the math.

Posted at 02:48 PM in What Passes for Parenting | Permalink

I once paid an exotic vet more than $100 bucks to save a very small slider turtle we found in the parking lot at the local YMCA. My children named it after their cousin. It survived but when it (pardon for I don't know what sex it was) showed further signs of ill health a year or so later I made up a ritual and stated it must be released into the creek at the nearby park. Once was enough...
CLM

Count yourself fortunate, I live with the animal rescue woman.
I tried to shoot my dog Zelda twice before my wife finally intervened and took the dog in. Zelda was a stray and kept coming around after the ducks. The first time I couldn’t get a good bead on her and was afraid of hitting my neighbor’s truck and the second time the gun jammed. The bill for heart worms, some other kind of worms and tick removal, not to mention the new bedding, dog bowl, dog toys and collar and stuff - $1,200. The cost of a bullet? - Not much.
I thought you grew up in Chicago. Huh.

When did your husband become the good parent? Scary how these things change.

I have a dedicated credit card for vet expenses. Some women shop, some women lunch, some women decorate, I hand money to my vet.

When the smell of dog pee joins the smell of cat pee on the Turkish rug, I will once again be able to reign superior in the pet-parenting realm.

I wouldn't worry about it. You won't even be able to smell the dog pee over the cat pee.