We have ways of making you talk 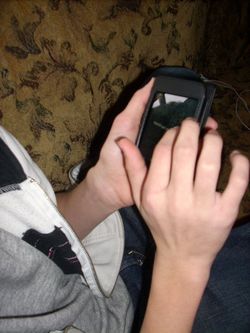 "Do you understand what you did wrong?" the mother asks.

She has his attention. Also his iPod.

"Yes," says the boy, whose brief electronic withdrawal has left him jangly and compliant. "Can I have my iPod back now?"

"Is that an apology?" she asks.

"Yes," he says, his fingers vibrating in the empty space where his touch screen should be. "Yes."

"For what are you apologizing?" she says, with the careful enunciation required for parent to teen communication.

He looks longingly at the shiny black rectangle in her hand, but is not yet ready to pay full price. "For tapping her on the head," he says, drawing out the word "tapping" to signal his disgust at being made to suffer for so insignificant an infraction. His sister sprays silly string all over his bedroom and he gets punished? He barely even touched her.

"Tapping?" His mother raises her eyebrows to indicate the insufficiency of his remorse.

He switches to exaggeration to make the same point. "For giving her a black eye?" he says.

She starts to walk away.

"Okay," he says quickly. "I overreacted."

Now she can sense the power emanating from the leather-encased pile of circuits in her left hand.  There is something in his voice that sounds almost like sincerity. The iPology, she thinks.  Why not see what this application can do?

"That is a start," she says. "Is there anything else you shouldn't have done?"

"I shouldn't have talked back to you," he says. The words are coming faster now, his eyes moving between her face and the hand that holds the device.

"I didn't take the recycling out," he says.

"I drank cranberry juice out of the bottle."

"Yes," she says, concealing her disgust. "Is there something else you want to tell me?"

"Not necessarily at home," she says. "Maybe something that happened at school?"

"Possibly," she says. "If someone from school had called me, what do you suppose they wanted to tell me?"

"It might have been," she says, twirling an earbud wire around one finger and letting it drop again.  "What would Mrs. Sill have called me about?"

"Because I didn't bring my violin to class?" he offers.

"Maybe," she says. "Or maybe it was someone else who called."

"It could have been," she says, encouragingly. "What do you think she would have said?"

"Um," he says. "Did she overhear me say something?"

"I might have used some bad language," he says.

The thing is inexhaustible.  And it might have been too, if not for the friend in the other room. "She's just trying to get you to admit stuff," the friend says finally.  Her son blinks slowly, still emerging from the pull of the device.

"Now, shape up and give me a hug," the mother says quickly.  And he does.

Posted at 11:56 AM in Insincere Apologies, Suburban Kamikaze Dictionary, Teenagers , What Passes for Parenting | Permalink

Can I download that app? Like, for 5 years down the road when I'll need it to elicit iPologies from unwilling transgressors?

Oh, you are a wily interrogator! I must study at your knee...

Wait - I'm confused. Are you Catholic? Because if you change the sins and substitute Your Eternal Soul for the ipod, it sounds like a pretty standard confessional discussion from the mid to late 60's.

I could never subscribe to any belief system that does not recognize drinking my cranberry juice straight from the bottle as a sin.

Brilliant. You are absolutely brilliant.

Bah; mine retreats into a sphinx-like recalcitrance that's immune to interrogation, grounding and probably nuclear attack too.

(And I had to walk to school through the snow, uphill, both ways. So there.)

Genius. Who needs torture when you can confiscate the ipod?

Omg, I love it! I have a toned down version of this I use for a 4 year old at school when he SWEARS he doesn't know what he did wrong. Just insert Thomas the Train set for ipod. ;)

Thomas the Tank Engine is a powerful incentive. Against all advice, I incorporated the overpriced little wooden trains into our potty training method. And by "method," I mean the completely erratic mix of motivation and inconsistent techniques we employed before giving up.