The sequel is a lot more complicated 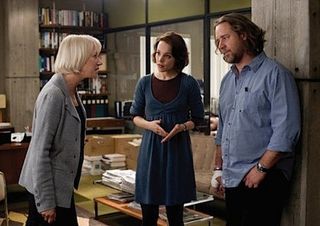 He's a little bit of an asshole. She's a little bit green. They don't really hit it off. For one thing, he mocks her in front of the entire office just because she tapes her press badge to the inside of her notebook.  There is a good reason for this.

When they're assigned to the same story, he tries to relegate her to standing outside the crime scene tape all day, just in case that prick of a police lieutenant decides to walk over and say something useful.  Which is never going to happen. So she goes back to the newsroom with nothing and he's got the whole story.

There is no way these two are ever going to get along. Which is to say they're knocking stacks of paper off the desks after hours within a few months.  It's an old newsroom cliché: first comes the double byline, then comes the double stroller.  The sequel is a lot more complicated.

Posted at 11:44 AM in Ask the Suburban Kamikaze | Permalink

I knew they'd beat you to it if you didn't write the damn story. Still too busy taping your press badge into your notebook. Stop researching and write!

(He comes crashing through the door ala Kramer)

Did somebody say asshole?

The resemblance is uncanny. Except he is missing stitches, and she her panties in the key of G.
cheers,
Mr. String Section