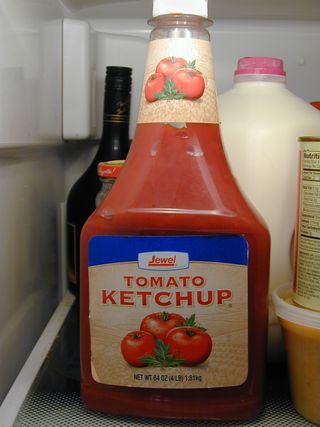 I return home to the Kingdom of Daddy to greet my newly reformed family. "Things will be different around here," he promised as I left for South Florida, where the sun is always shining and the air smells like Key limes and coconut ...

"That is your hand lotion," hisses the Executive Suburbanite, rolling her eyes.  But here I am back in Chicago, wearing the same scent, and the air does not smell like Key limes and coconut.

It smells like an enforced cleaning binge, with notes of Pine-Sol and resentment.

But I am not complaining.

The house is tidy, the children have survived two weeks of limited supervision and very little has been broken or covered in unexplained blue stains.

Prominently displayed on the refrigerator door: a weekly schedule of kitchen duty meant to convey the system of order and cooperation only possible when Daddy Is In Charge.

I smell Windex and a sham. I cover up "Tuesday" with my hand. "Whose day is Tuesday?" I ask.

Nobody knows. Hah.  I did not just meet these children yesterday.

It is not Daddy's fault that he believes it is just a matter of responsibility and consequences. I used to believe that too. I have just had more time to see my illusions crushed underfoot like goldfish crackers in the carpeting.

So when he tells me the fifth-grader is perfectly capable of making her own lunch and he hasn't made lunch even once in two weeks,  I do not doubt it.  In the Daddy School of Self Sufficiency, this is known as the Make Your Own Lunch or Go Hungry Axiom.

But its corollary, Mommy's Principle of Unintended Yet Completely Predictable Outcomes,  says Hello? Have you ever seen that girl work a room full of food?  This is the child who has been talking waiters into extra dessert portions since she was four. Who made eyes at the chef in the Indian restaurant until he invited her back to tour the kitchen and then sent extra baskets of bread to our table. Someone in the lunchroom will go hungry. But it won't be our daughter.

"What did you eat for lunch this week?"  I ask her. She gives me a sly smile. "I scavenged," she says.

At home, there is chocolate cereal in the pantry and there are Pop Tart boxes in the trash, but really, what does this prove? These are small things.

The 64-ounce bottle of ketchup in the refrigerator is enormous. I should let it go. I will bring it up.

"What were you thinking?" I say.

I already know what he was thinking. He was thinking, "Here is a way to provide an almost unlimited supply of ketchup for my family at the best price."  Who could fault him for that?

"The top of that bottle will resemble an open, running sore before we have used even a third of it," I say. "The sides will be crusted over with ketchup residue and the shape of the bottle will be imprinted in ketchup on the refrigerator shelf.  And it will still be nearly full when we finally throw it away."

But really it is no big deal.

Posted at 11:17 AM in This Week in Delusional Thinking | Permalink

Also, it's a store brand so it will separate into water and red dye within about two weeks.

Well, since they didn't miss you, you can come on back! We never did get to the beach, where Dr. L is having breakfast with her family right now...wait, have you checked on the rabbit? No matter how clever he may seem Mr. SK has a weakness and though he may have nailed the individual trees, the forest still lurks...

You had me at "Pine-Sol and resentment."
You speak the truth.

Ooh, I just noticed! Why's the Baileys so far in the back?

I know exactly what you mean. I think my husband has perfected a fire drill system that is put into place an hour before I arrive. The dead giveaways are the sheet marks on his face from napping and the fact the washing machine has tipped over in the basement due to an oversized load.

My husband buys the giant bottle also. He just manages to eat it on almost everything so he actually gets a pass on it. I get the big bottle of chocolate syrup and just go around looking for things to put it on...hehe.