« Between the lines | Main | A remote possibility »

A Palm Tree Means Never Having to Say You're Sorry 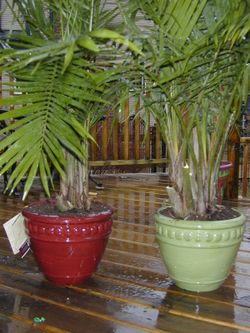 Two new palm trees joined our household over the weekend, part of our tropical-foliage-as-apology collection.

The areca palm, also known as the butterfly palm, offers a lush and relatively low maintenance form of atonement, without the wholesale concession implied by the traditional floral gesture.  A palm tree admits nothing, really.

The offense had its roots in a small request. Could he possibly turn on the television for me so I could watch the world figure skating championships?

A bit of background here:  I, like the majority of the 10-15 Americans who still read books and newspapers, am only an occasional television viewer. This apparently makes me a moron.

Because I cannot operate a remote control. And neither of the two televisions in our house can be operated with fewer than two.

When I ask for help I am treated with the kind of scorn reserved for people who pull repeatedly at doors marked "push."

To illustrate my stupidity, Mr. Kamikaze starts with a question, delivered in the tone of voice with which you might help a child learn to tie his shoes. "Where should we start?" he begins. "Which button do you think might turn the television on?" 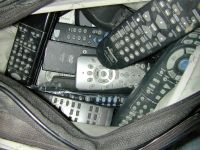 I am clever enough not to fall into his trap. I know that "on" is not one of my choices. There is a small piece of luggage in the basement containing 16 unused remote controls by Pioneer, Panasonic, Denon, Samsung, Magnavox, Canon, Sony, JVC and something called just "Z". I have no idea why we are keeping them. But I do know that none of their approximately 752 multicolored buttons is marked "on"  because I checked. This is what is known as reporting.

Then you refer to the two-page instruction graphic which has more red designating lines than the human reproduction pages in a college-level biology textbook.  For example: "remote key green indicates TV1, while blue with number 2 indicates TV2."   Some functions, however, must be keyed in using a second remote on which the commands are mostly identical. For god's sake don't forget your device codes.

Really it could not be any clearer. Except by now the world's best figure skaters are unlacing their boots.

But this is not how Mr. Kamikaze sees it. He suggests that the fault lies not with a system that requires a longer sequence of commands than is needed to launch the space shuttle, but with me.

I think his exact words are: "Stop being such a moron."

To which I respond with a gesture suggesting that his chances of engaging in acts of human reproduction in the conceivable future are remote.

And I mean it too. Then he leaves and comes back bearing palm trees and my ire dissipates like the condensation on a Corona bottle sweating in the sand next to a hammock tied between two palm trees.

What pique can withstand the charms of a palm tree?

Posted at 11:43 AM in Insincere Apologies, This Week in Suburbia | Permalink

You know what's frustrating? Your husband goes away for the weekend (that's not the frustrating part). You make sure you have P&P95 from the library (because Blockbuster doesn't have anything but that Keira Knightly version, which is acceptable but really no comparison) You are all set to do a wine, fast food and dvd marathon and you go to get your carefully written instructions for the several remotes it will take to get the dvd player going. And you can't find the instructions so you have to CALL YOUR HUSBAND to talk you through it. You feel like Karen Black in Airport 75 (look it up, youngster).

It is almost certainly part of a larger conspiracy to make us feel helpless, going all the way back to Airport 74 even...

I still can't figure out how you can keep up this blog with videos, photos and links and not turn on your damn TV. I realize this is probably some kind of coven violation but what the hell I'm so deeply in trouble anyway ... thank God there are Coach bags to pull me out of oblivion.

i once called my husband at work and freaked out on him cuz i pressed the wrong button on the remote and couldn't get it back to normal, and dammit, oprah was on! (i divorced him and his fancy electronics, and am now happy with my 20" tv with built in vcr, thank you very much.) you are not alone, sister.

We have the same remote. I hate it!

Well Executive, for one thing there are Typepad people at my beck and and call. And I'm sure I could master the remote, if there were a reason to turn the television on more than twice a year. But there isn't, so I don't. And yes, thank god for Coach and executive friends. The bag is beautiful and so simple to operate!

Some matching gloves would be nice.