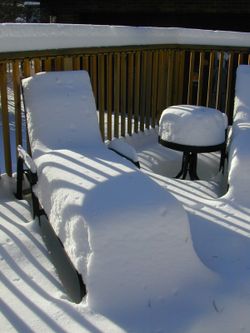 Mr. Kamikaze comes in from the cold.  And by cold, I mean, sharp as knives cold. I know this because he runs up the stairs to where I am just barely warm enough under the covers so that he can get his hands under my clothes before the ice thaws.

I am on the phone complaining to my friend in Fort Lauderdale about how cold it is in this stupid house when he begins groping under the covers with his ice hands.

But this is first rate entertainment for him.  He probably walked all the way home from the train station with his gloves off for the sake of this little prank.

Is it not enough that I have to live through another winter here?

"Wait," says my friend in Fort Lauderdale. "It is 13 below and you made him walk home from the train station?"

Has she not even been paying attention? It is barely even 75 degrees in this miserable old house, where I have do my reading under the covers in order to keep enough blood in my fingers to turn the pages. And she is worried about him?

"Do I need to remind you whose decision it was to move here?" I say sharply.  "I would love to put on 12 layers of clothes to drive to the train station and pick him up," I say, "but every year he makes the same stupid remarks about how "fresh" the air is. Or he pretends to be baffled about news reports of people freezing to death in their living rooms."

"You are the worst wife ever," she says. "Tell him I said you should pick him up from the train station."

"Dianne says they are all running around stark naked in Fort Lauderdale," I say to him. "Remember naked?"

Posted at 08:45 AM in This Week in Suburbia | Permalink

This winter really is endless, isn't it? And if your husband hasn't learned from painful experience to stay far away from you on days (or should I say WEEKS) like this - unless invited, that is -, you haven't been doing your job, girl.

This is probably not the time for me to tell you it's 43 degrees right now in Germany, is it?

PS- I keep my brass knuckles on at night when I'm reading in bed...just in case any such "shenanigans" were to occur.

Yes, that is cold.

My future in-laws live in IL and have a winter home in FL. This past fall, they announced they'd stay in IL all winter and sell their house in FL.

Then we hit subzero temps.

Next thing you know, they're calling us to take all the food out of their fridge so they can high-tail it down south.

Yeah, the FL house is off the market.