What to Expect: The Vampire Years 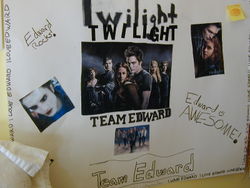 What can I do? I think when I see the lunch bag on the floor in the living room. A corner of a potato chip bag shows through the opening.

Don't look at me like that, there are tangerines in there too.

Not that it matters. Healthy, unhealthy, it's here on the floor while she is at school trying to convince the other fifth-graders she is a vampire.

Vampires, of course, don't carry sack lunches.  Which is why, despite having put it into her backpack twice this morning and handing it to her after she took it out a second time, it is here on the floor, where she left it.

At first, I thought she was just getting tired of ham sandwiches and chicken noodle soup. I tried crackers and cheese, yogurt packed in ice, cold pasta.

But she didn't touch it. I found unopened lunch bags in her backpack, in her room and in the car.  It was an annoying waste of food and time, but other than that, I didn't worry about it. I am not one of those orthodox, three-meals-a-day kind of mothers. Also, being mortal, I have to pick my battles.

I don't have all of eternity in which to engage in endless power struggles over food, guest towels, violin practice and empty toilet paper rolls. So I was prepared to let the lunch thing go and focus on the important stuff.  I will find out who keeps putting the crackers back into the pantry without sealing them if I have to bring in a forensic team.

Besides, as she eventually explained to me, as president of the local chapter of the Teen Vampire Fan Club, she had to set a good example for the others. It made perfect sense.

I remember my first vampire crush. Louis was tall, brooding and elegant, like those men in the Versace ads with their long black coats and their ...  But, I digress.

Anyway, this is different. Louis was only a character in a book. There were no glossy movie star photos to stain with my Bonne Belle roll-on lip gloss.

At lunchtime, the little vampire calls from school. Could I bring her lunch to school? she asks sweetly. Right now? Apparently she is over her limit on the emergency white-bag lunches they have been giving her.  Probably, some sort of  notation has been made in a file somewhere.  I imagine the conversation in which I have to explain to school officials the nutritional needs of the undead.

Maybe body image issues would be the better way to go.

I take the lunch bag to her classroom. She is perched in a chair deep into a book. Perhaps she is already researching her next character.  I hand her the bag and then approach her teacher at her desk.

"I make her lunch every day, but she refuses to eat it," I say defensively. Mrs. A. looks up and waits for me to explain about the nutritional needs of the undead.  When I hesitate, she helpfully supplies, "body image issues?"

The fifth grade is full of them apparently.

Posted at 08:57 AM in Girl Kamikaze, What Passes for Parenting | Permalink

Vampires huh? Do I need to call the bug man?

Ah yes, Louis was my first undead love as well. Although, I recall dreaming about Barnabas Collins from Dark Shadows as a wee tot so my path was set long ago.

perhaps you can add blood sausage to her lunch?

Louis
Angel
now this - each generation has their vampires...

I love that Mrs A knew what you were talking about!