« His and Hers Thanksgiving | Main | Flush with romance »

The Twelve Arguments of Christmas

The girl peeks around the shower curtain cautiously. She is wearing light-up reindeer antlers and using her Cindy-Lou Who voice.

"Mommy?" she coos. "Can we bring some of the Christmas boxes up from the basement now?"

They sent her, knowing she had the best chance, the only chance really, of safely confronting the Grinch in her cave.

They've been after me for weeks to launch into the annual festival of clutter.

"It's too early," I say at Thanksgiving.  A week later I begin outlining conditions.  "When the entire house is clean and sparkling and looks like a spread from Architectural Digest, then we can start decorating," I say. "There are six pairs of shoes and a pile of dirty dishes in the living room. You can't tinsel over that."

This morning the negotiations begin in earnest.  She promises to clean the living room. He promises to help.  I promise to think about it. Daddy tells them I hate Christmas. "I don't hate Christmas," I say. "I just don't think clutter is festive. Can we just keep it simple for once?"

The next thing I know, he has three ladders perched against the side of the house and is taunting the neighbors.  The family from down the street stops by in their minivan to challenge him. "You've got a long way to go," says Mr. Minivan. "Hah," says Mr. Kamikaze, scaling the highest peak on the roof with his hands full of lights.  "I haven't even started."

"For God's sake, you're going to kill yourself," I shout up at him.  He laughs. "Spend the insurance money wisely," he says. We both know I will spend the money on shoes.

Later, I will return outside to find that he has lit every peak of the house and is running lights along the gutters, the chimney, the windows and an old bird's nest.

"Enough,"  I will say. He will laugh and ask the children if they think it's enough. I cannot win this argument. But I can't imagine how far things would go if I put up no fight at all. I am the only thing standing between my family and holiday madness.

Now Cindy-Lou wants to bring up "some" of the boxes from the basement. She has her charm set to maximum. "I cleaned the whole living room," she says, smiling and batting her eyes.

The downstairs is in chaos before I am even dressed. Heavy boxes are dragged up the stairs in a steady percussion of thumping and bumping.  The cartons and bins are opened as quickly as they arrive, the contents strewn across the room.

It is a scene for the Christmas cards, the 10-year-old in her antlers, the 13-year-old in his Santa hat, pawing through the garland, rediscovering and claiming their favored objects. Their eyes shine like the decade's worth of glitter embedding itself in the rugs. 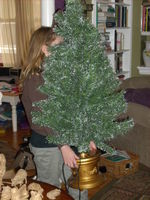 Look! There is the little light-up Christmas tree with the gold stand!  Just like the other one, except one has a little star on the top and belongs to ... wait, which is which?

"That one is mine," says the boy emphatically. He is not using any kind of Who voice. "That tree has been in my room every year for the past four years."

By the time I come downstairs, Daddy thinks he has resolved the issue by decree: Nobody will get the little light-up Christmas tree in their room. He goes back outside with another box of lights. Oh yeah, that settles it.

The children are on me before my feet hit the bottom step:  "Mom," says the teenager. "You need to settle this. Take a side," he demands.

"Whoa," I say. "I don't even know what the argument is."  We come to terms after several rounds of protracted litigation. He will get the light-up Christmas tree with the star on top, she will get first pick of the stuffed animals. She chooses his Mouse King, which briefly threatens to scuttle the deal.

Meanwhile, Daddy has shoveled Edward off the walkway to make room for his vision of a ribbon of tiny lighted pine treees leading to the front door.

On our way to the Christmas tree lot we argue over the definition of "hypothermia."  This is settled more quickly than a debate over whether the teenager should have an iPod touch.

The teenager likes the Douglas fir. The 10-year-old wants the Frasier fir.  I weigh in with my preference for a smaller tree, paving the way for them to agree on the tallest one, a balsam fir.

Mr. K wants to stop at the lighting aisle. "We can't possibly need any more lights," I say.  But no one is listening to me anymore.

At home, Mr. Kamikaze has to shave six inches off the top of the tree.

Even so, it touches the ceiling.

Posted at 07:42 PM in Holiday Traditions I Just Made Up | Permalink

At the tip top peak of the roof hanging lights? The man is not insane, he courageously loves his family to risk, life, limp and the pursuit of Griswolds Christmas Vacation.

You must reward him for that.

(Mr. Kamikaze, let me know how it goes. I got your back buddy.)

Yep, that is what our house looked like this weekend. Like someone threw up Christmas all over it. But, we got everything decorated and looking good...until today, when I came home to find our tree on the floor, broken ornaments everywhere.
Sigh. Why do we bother??? :)

We do not have this problem in our house. My husband was a Christmas-abused child, having to help his dad with outside decorations year after year under the careful direction of his mom. You couldn't get him to place a string of lights outside if you put a gun to his head. Inside, we have such a phenomenally destructive cat that the most we can do is throw a 50-lighter on a scheffalera. But that's ok, because across the street our neighbors have a 10-foot-tall, blow-up, moving merry go round that lights up and gives us lots to remark on.

I think we must be neighbors.

"D" is for delegate, Executive.

You didn't get to the top of your failing industry by asking for help, did you?