Get out your notebook, there's more 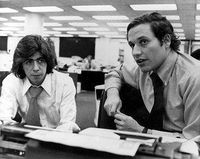 I am tired of your chickenshit games, Paris Hilton!

I don't want my children to grow up in a world where celebrity baby watch replaces watchdog journalism. They need real newspapers.

It's everything you want them to understand, right there, on the doorstep day after day: geography, civics, science, culture, right from wrong, honest to god heroes and the power of standing up for what you believe in.  And occasionally, stuff that the people who make the laws, spend your taxes and run your schools don't want you to know.

Turn off the television. Unplug their video games. They need to know what you know.

We are putting a red flag in the flowerpot today.  We might just leave it there.

It’s just flat sexy when you go on like that. You know that.

I wanna have your baby.

You need to find a way to say that with a quote from "All the President's Men."

I may be wrong, but weren't W/B able to do their jobs because someone had their backs? If the 70's were so dorky and substance-less, why did it have Katharine Graham while we get Rupert Murdoch?

What a great post! And maybe the best way to save newspapers: Get your kids to read them. Three cheers for SK!