« Flush with romance | Main | Get out your notebook, there's more »

It has certainly been a busy year for the Kamikaze family! I hardly know where to begin, there have been so many high points and achievements!!

Some of them were darn near miraculous really, like the fact that after more than two decades in the business and a boxful of prestigious awards, Mr. Kamikaze has managed to keep his job in the horse and buggy industry - at least through New Year's. 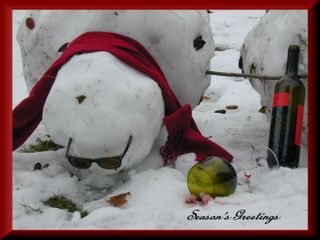 Thankfully, I have been able to supplement the family income with my efforts in the lucrative world of freelance editing, where there are no awards, just the satisfaction that comes from crisp clean punctuation and copy flow! If there is anything more professionally satisfying than excising superfluous words I don't know what it is!

Our children, as always, represented the peak of our achievements in the Kamikaze family.

The girl is growing up so fast, we can hardly keep up with her cosmetic needs!  She has recently developed the cutest little vampire crush, spawned by her obsession with that crazy-popular series of books about the 15-year-old virgin and the 108-year-old vampire in a 17-year-old  boy's body who impregnates her with a baby demon. We don't like to brag, but she seems to be the only 10-year-old in her class reading at this level of maturity.

Her leadership qualities continue to amaze us. She recently organized the neighborhood's first Teen Vampire Fan Club, with a membership contract that is positively Sicilian. "Rule 1. Do not complain to any parents or legal guardian or you will be kicked out..."

What could they possibly have to complain about?  It's adorable really.

Boy, Esq. continues to amaze us with his technological skills. Schoolwork has taken a backseat in recent weeks, but it is hard to quibble over in light of the fact that he recently beat his own high score in the iPod Touch "Bubble Wrap" game, popping over 293 virtual plastic bubbles in the allotted time! We are popping with pride!!! What will those ingenious folks at Apple come up with next? A hand-held game that simulates the swatting of flies? Nope. That's already available - and at no additional cost! I tell you, if this is not the smartest generation of kids since those geniuses who thought up the Apollo mission, I don't know who is!

And speaking of bubbles, we could not be happier in our new Chicago home, despite the fact that it is currently 12 degrees and the 1940's era furnace requires near-constant maintenance. At least it's real estate, worth almost as much as it cost, not counting the renovations, which are coming along at a pace expected to precede the foreclosure sale.

Speaking of sales, from the looks of all the for sale signs popping up, we are living in one "hot" market for depressed residential real estate. (Not literally, of course! Literally it is cold enough to freeze the tears in your eyes! Not that we have anything to cry about.)

We did quite a bit of traveling this year, despite our busy, successful lives. We visited South Florida 11 times out of crushing homesickness, enjoying the occasionally lavish and completely unpredictable hospitality of our closest friends, some of whom took the opportunity to take their own little vacations, since we were there to watch their children.

There were mints on the pillow at Janette's, soft pink slippers at Dianne's, little spinach strudels and good red wine at Dr. Liz's , something good always baking in the home of the Queen's Own Jane and wet towels on the floor at the Executive's, where it is always BYO toilet paper.  The boys almost managed to make a pot of coffee!

Dianne and I managed to sneak off for a Thelma and Louise-style road trip, where a decade's worth of friendship nearly collapsed in a series of arguments over rest stops and fast food. Of course I was only kidding when I threatened to drive our Pontiac rental car over a cliff - there is nothing even approaching that kind of landscape between Miami and the postcard-perfect landscape of Lower North Florida's dog fighting region.

Later in the summer, the Executive's daughter paid us a visit, during which the girls managed to flood the pool table with their crazy bathtub antics. How we all laughed over that one!

On a personal note, I did manage to overcome a raging crush on the furnace repairman and my bitter unhappiness over the family's move long enough to have sex with Mr. Kamikaze a total of 16.75 times - a number I can share with you because Mr. Kamikaze is such a sentimental fool that he has begun keeping track! Though I still do not completely understand his scoring system. It is more complicated than figure skating!

Which brings us to another personal milestone: after a half dozen years and untold thousands of dollars in private lessons, I had the honor of performing in the Frozen Oaks Ice Rink annual Christmas show with my edge class this year, where many people in the audience said my performance was among the tallest they had seen.

I continue to spend at least three days a week on the ice, a commitment that, despite its toll on my job search, my unfinished novel and the family's income, has left me with what has been described as one of the nicest asses of any 46-year-old suburban mommy in the neighborhood. Teenagers say the darndest things!

As for the job search, I have been innundated with offers to write for almost nothing, which will certainly leave us sitting pretty on April 15!

But despite our full and hectic lives, we are thinking of each and every one of you this holiday season with only a trace of the bitterness to which we are fully entitled.  And that is nothing that a glass or two of cheap wine won't deaden somewhat.

Posted at 08:46 AM in Holiday Traditions I Just Made Up, Seasons Bleatings | Permalink

I want to do a family newsletter that includes the following: "parole officer", "unfortunate consequences of contraceptives purchased at the outlet mall", and "club soda does an excellent job of removing red wine from carpeting, but the blood was another matter". Then I want to send it out and see if anyone notices. Also, would you please explain the 46-year-old part? Because I can't figure out if that's part of the humor or a typo or what.

Yeah I know. It's the figure skating. Your ass just never gets any older!
And please! write that family Christmas letter. I would read it by the fire, sipping mulled wine and laughing my unbelievable ass off.
SK

I WILL WRITE THAT LETTER.

This is the best letter ever. If only I could write a Christmas letter half this good...I would.

Congratulations on the 16.75 acts of love in 2008. But please explain the .75 encounter. And use lots of adjectives, like "turgid."

Happy Holidays to you and the Kamikazies, please send post card of one of the nicest asses of any 46-year-old suburban mommy. THIS, I gotta see.

If you're 46, whose picture do you keep putting up? And did you do the Puntabulous vs. Kamikaze thing 10 years ago? I'm still confused.

Re the .75: I may have two-footed a landing there or something...

LOL! I love that letter! Much more interesting than the usual "we are so perfect and you're not" holiday letters!

replace "furnace repairman" with "plumber" and you've pretty much mirror-imaged my year.

well, except for the minor bit about how october through november, we figured out that our home was G-d's Little Plague Test Kitchen (yes, we experienced death, plague, floods (hence the plumber), and illness right here.)

i decided to live vicariously through others' holiday newsletters this year. i think if i reported on our year, there would be many more prozac prescriptions resulting ;-)

happy holidays from your nation's capitol.

oh, i forgot pestilence. i think lice counts as that, right?

There is never enough lice or pestilence in those Christmas letters.

So let me get this straight: We get a year of photos of snowmen and pool tables and craft projects. And not a single photo of the skate-toned derrière?

It's really hard to photograph your own ass, RK. I can't even take a decent picture of my child's very last elementary school holiday program! And it was right in front of me.

RE Thelma and Louise, you left out the part about the 2AM Scrabble to the Death Match with the 11 year olds wherein you and your scrabble dictionary had to be restrained, oh, and the part about how your mother's house would be easy to find because of the statue out front and then we discovered that every house in that neighborhood came with a statue out front and were we even in the right neighborhood? And yes I prefer rest stops in northern Florida over truck stop Quickie Marts because oh, I don't know, only the state troopers are ARMED there and there is actual toilet paper as opposed to the truck stop where any toilet paper they ever had was wound around a plastic palm tree in the "Gals" room. To be honest I was glad you let me stop to pee at all--oh that's right, we ran out of gas and HAD to stop. I'm sure you enjoyed the tattoo art and twinkies but I found that being off the beaten path somewhere north of Ocala was the fair equivalent of Season Two of Lost with a little Fringe thrown in. And, you never let me drive, thereby adding at least 12 hours to our carefully planned map quest schedule. But it wasn't all bad. We didn't kill each other, the cheeze its were shared (no they are not a vegetable) I have to say, it was the best road trip I've taken in 20 years. Same time next year then? I will bring the Mike Ditka Beaujolais.

Nothing good ever happened at a rest stop in North Florida, which, come to think of it, would be an excellent title for your memoirs. (I think "Cheats at Scrabble" might already be taken.)

The world would be a better, happier, bouncier? place...if we all took pride in our asses. I know I do. And there's absolutely no reason why I should. Irony!