« Camelot in the suburbs | Main | An idea so bad, it could only have been spawned in a Midwestern suburb »

Having a ball in the Midwest 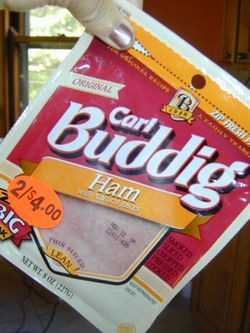 After my Iowan sister-in-law introduced me to the "walking taco," I was prepared to believe anything.

If someone had told me that fried Cheez Whiz on a stick was a staple of the Midwestern wedding buffet, I would not have questioned it.

Once you have accepted the fact that people will eat ground beef out of a Doritos bag, what is left to doubt?

Even so, the ham ball had me grabbing for my notebook in disbelief.

We were sitting around the kitchen table drinking wine in one of those far-flung Midwestern suburbs few outsiders will ever visit, when our hostess threw out a strange warning.

"Don't make me get the ham ball," she called to her husband, whose unfinished workday was keeping us from our dinner reservations.

Her husband came soon enough and we were spared whatever danger the ham ball posed.

"The ham ball," she repeated, looking to the two other Midwesterners at the table, who nodded in recognition of what is apparently both a popular hors d'oeuvre and a threat in these parts.

"Okay," I said, flipping open my notebook. "I have to know."

"How much of the Buddig?" our hostess asked her friend.  They debated, then settled on an amount.

"The Buddig" it turns out, is a package of Carl Buddig ham, which according to its label, has been "smoked, sliced, chopped pressed and cooked."  When I was growing up, we called this stuff lunchmeat.  It was piled artlessly between slices of bread and eaten with mustard, or perhaps mayonnaise.  The aesthetic possibilities went undeveloped.

But when chopped into bits, mixed with 8 ounces of slightly softened cream cheese, a couple of chopped green onions and a little bit of Worcestershire, the Buddig is transformed into edible clay from which the "ball" or  any number of other shapes can be molded. Footballs (with processed cheese spread laces) are popular and there is one reported case of a ham ball sculpted into a bust of someone's mother. This is accepted as an unironic tribute in the heartland.

It is a staple of the buffet and the block party, where I am told, the baked Brie goes untouched in favor of the ham ball.

"Cream cheese," our hostess confided, "is what holds Midwestern housewives together."

She added: "If you want to get really fancy, you chop up some more of the Buddig and you roll it in."

I may be getting in touch with my inner Midwesterner. I so want to make a ham ball.  But  this recipe is not going to cut it for me.  Any suggestions?  Wine pairings?  Party invitations? I'm bringing the ham ball.

This is HYSTERICAL! I was just at a pumpkin farm that had walking tacos and man, are they a hit! Who would have thought? I love your blog, I have been chuckling at every post! (Especially the middle-aged Hannah Montana..)

I'll see your ham ball and raise you a cooler full of “baloney salad” sandwiches.

When I was a kid, every car trip of any length – and there were many car trips of expeditionary length – was accompanied by baloney salad sandwiches.

1. Chop baloney. (For best flavor, use one of those jar-type choppers with the spring loaded blades in the lid. Allow your young son to do the chopping so as to spread the blame.)

3. Stir in a lot of mayonnaise.

4. Spread resulting goo on Wonder Bread, wrapping sandwiches in plastic wrap. (Do NOT cut off the crusts as that is where all the vitamins are.)

No, I don’t know why this was denominated as any sort of salad.

The sandwiches go into the plaid-print metal cooler and the cooler goes between the young son and his older sister on the back seat of the 64 Chevy. The cooler serves as both game table and DMZ.

After as little as an hour on the road, sandwiches are served all around by older sister. Father reaches back over his shoulder for sandwich without looking. Mother comments that daughter could hand father a live snake and he would reach back in same way and eat it. All laugh.

Here’s the thing: No one really LIKED these (shocking, I know). But Mom said they were “good for car trips” because “you want something moist on a car trip.” (We’ll pause briefly for snide, cynical, vaguely Freudian wisecracks.)

Go to any church fundraiser and buy yourself one of their self-published cookbooks. You think ham balls are Midwestern-exotic? You are about to enter a whole new realm. I have a cookbook from northern lower Michigan that will help me immensely next time I need to whip up a batch of head cheese. And if I can veer off-topic here, I was in South Carolina several years ago (that's near Miami or wherever you're from, right?) and we had something our hosts called "mennacheese", made out of shredded cheddar, pimentos and mayo, I think. It seems that the Midwest is not alone when it comes to appalling regional delicacies.

I do not think I will be able to eat for a week after reading those last two comments. But I do know that "Appalling Regional Delicacies" is a great idea for a cookbook. We're going to need some family photographs R.K.

I came across a book a while ago called the Gallery of Regrettable Food, which highlights a lot of dishes from the 50's, and I'm betting that a ham ball would be in there somewhere.

If you get a chance, read that book. It comes with pictures. *Shudder*

I'm right there with you about the ham balls. I never heard of them before until we moved to Iowa 5 years ago. There is also a "hot dish" with ham balls that are booked in a barbecue type sauce. Not anything I've ever come to like! I do have to say that the walking tacos are a big hit with my family. As a mom of 5, it's an easy dish to make in a pinch and it seems to be a staple at every graduation party we've been to. One of my favorite Iowa must haves isn't food, but a handbag. Made in the midwest and started by a mom in Iowa. Check them out at www.bagolitas.com

Ham balls? It's enough to make me swear off potlucks for awhile.
Walking tacos sound kind of intriguing, though.

Something very scary has happened, namely that I have the vague feeling that I've mentioned "The viking" in a comment here before. And that should never be. I'll go ahead anyway...I was introduced to the Viking at the Western Montana Fair...fried meatloaf on a stick.

I'm still waiting for someone to invent a McDonald's french fry dipped in Toblerone.

I think I would have remembered "the viking." Good god, that is going on the cover of "The Appalling Regional Delicacies Cookbook."

You bring the ham balls, I'll have a nice jello mold with pineapples in it and a CocaCola cake, made with mini marshmallows. I just love the Midwest! Pork rinds, anyone?

I'm giggling uncontrollably. And thinking of all the "ball" shapes you could use...

Bossy, in a pinch, you can make "baloney salad" sandwiches by starting with olive loaf or pimento loaf and just not adding the pickles.

But only lazy moms, whose houses were poorly kept, and in whose care we were never trusted, resorted to such scandalous short cuts.

Or so Mom said 40 years ago. I believe her reasoning began:

"It's the sweet pickles that give it a little crunch." After that, the memory is a bit of blur.

hahahah! This is hilarious -- partly because I just spent last weekend reminiscing in Madison and talking about any number of excellent midwestern delicacies we all discovered while living there. Also, my grandmother (born and raised in greater-Detroit area back when it was still largely rural in SE Michigan) used to make ground ham and pickle sandwiches that were AWESOME. Leftover ham (real ham, on a bone, not Buddig), ground in a meat grinder with a nice handful of bread-and-butter pickles ground in. Add a little mayo. Spoon between two slices of toasted bread. Eat with a chocolate coke. mmmm...

And I would buy "The Appalling Regional Delicacies Cookbook" in a heartbeat. Especially since I have several jello "salad" recipes to contribute whose ingredients include both mini marshmallows and cream cheese.

Ok, it isn't just the midwest. Had fried pickles tonight at a Cajun restaurant. And my memories of growing up in New England include something called "sandwich spread" that seemed to be a jar of just sweet pickles ground up in mayo. Seems bad food knows no borders.

I see this cookbook in your future. I also sampled the fried pickles with nthnglists and I have to say their awfulness doesn't come close to the ham ball. The South in fact is a motherlode of disgusting dishes, I think. I'm thinking of some ridiculous dish my husband's family makes (mother in law from alabama) that involves jello, cool whip and fruit processed into a slimy soup. Although all the comments on jello molds makes me think this is not something those Southerners have to themselves.

SK dear, do come south for Thanksgiving, won't you? Your ham ball is low fat compared to our family's beef dip, served in quite a massive bowl: Chopped summer sausages mixed with mayo and a little paprika on top. It doesn't leave much room for the actual meal, but we manage.

I grew up in Chicago and introduced the Ham Ball to the DC area (yes, I'm going to take credit). Although our family recipe includes 2 tablespoons of sour cream and allows for Carl Buddig corned beef to be substituted for the ham, you know, for our non-pork-eatin' friends.

Cream cheese is the glue that holds my thighs together; this much I know for sure.

Never seen a ham ball, and I've lived in Iowa for 28 years. I suppose it depends on what part of the state you travel to, but we're a little more sophisticated where I am from. Those purses are atrocious btw.