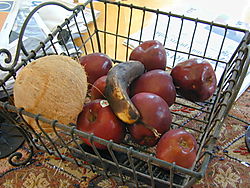 There is disorder in the universe.

The girl senses it before she is even completely awake.

"Move!" she shrieks upon coming downstairs to find that Boy, Esq. is not in his usual spot.

Every school morning, since the beginning of time - or at least the beginning of fifth grade - Boy Esq. seats himself in the corner chair. His sister takes the couch, where she falls back to sleep repeatedly, while I frantically ply her with hot cocoa and perky announcements just like the ones my mother used to annoy me with: "Rise and shine sleepyhead! I've got hot chocolate!"

This morning, however, things are veering toward chaos from the start.  Not only is Boy Esq. occupying his sister's region of space, he is watching CNN political coverage instead of cartoons.

This is too much for the normally agreeable 10-year-old, who walks over to the television, switches it off and announces that she is going back to bed.

She stomps back to her room and slams the door with a big bang as the idle threats I yell from the living room collapse weakly against the boundaries of space and time. I haven't even made lunch yet.

I am not saying that the giant Swiss particle accelerator is to blame. But if, as scientists insist, the Hadron Collider has not set into motion the creation of a tiny black hole that will eventually devour the earth, tell me: where did the school picture form go?

It was sitting in the fruit basket in the center of the kitchen table just yesterday, or possibly the day before. Today it has completely disappeared.

And not that the world's physicists seem to care, but today is school picture day.

Photo:  The fruit basket where important documents and overripe bananas go to collapse in upon themselves.

Posted at 12:44 PM in Boy, Esq., Girl Kamikaze, This Week in Suburbia | Permalink

My mom never prodded me with hot chocolate. I feel gipped. Or is it gypped? Or maybe jipped? Meh. Who cares how it's spelled if we're just going to be devoured by a black hole anyway.

Let's just say you were cheated.

Ha - Bossy has been there to witness your children in these exact seats and Bossy agrees with Fallon, the world is listing to the right.

Maybe your son has mistaken CNN for cartoons.
I get that same feeling these days.

It's utterly tangential -- but I LOVE your fruit basket.

And I have no idea why the world is tilting beyond normal, but I am sure it's true. My children were kind to each other nearly all day yesterday. SOMETHING is going on.