« If this were a marriage, I would have already called in the lawyers | Main | School picture day in the elegant universe »

The hand that signs the permission slip 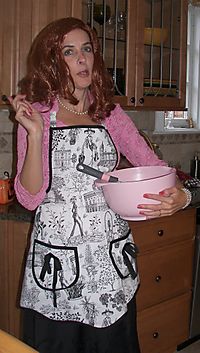 The other adult in my house, who happens to be a man -  not that it matters - you won't catch me engaging in that sort of gender stereotyping anymore - anyway, this person, who lives with me, says I am sexist.

It caught me off guard, frankly, because I consider myself 1) relatively fair-minded, and 2) too clever to get caught up in what has to be the  dumbest political/cultural debate since Dan Quayle took on Murphy Brown.

I fell into it unwittingly upon hearing the news that right-wing moose-slayer Sarah Palin had fallen victim to one of the 50,000 non-partisan ways in which teenagers can throw a family into instant chaos. Can we all just agree that boarding school is good public policy?

"She's got a lot on her plate," I observed, ignorantly juxtaposing the domestic imagery of a "plate" with the completely irrelevant family situation of a successful woman/person, who just happens to have a lot of offspring. I may as well have said she had a lot in her apron pockets. Or something about PMS.

I didn't think I was rendering judgement on her ability to juggle parenting and career, but it was clear that in my secret, sexist heart, I was holding her to a different standard.  It was a standard that assumed she'd be compelled to play a leading role in her family's domestic dramas - sucked in to their endless stream of grievances, demands and unsigned permission slips requiring immediate attention even it means bringing a pen into the shower. Can somebody bring me a towel?

"You would not have said the same thing about a male politician with five kids," my obviously more-evolved partner said. "It would not have been an issue."

Really? I wondered. Was I a female chauvinist? I had to acknowledge the possibility.

But first I had to empty the dishwasher.

Photo: The Suburban Kamikaze: as evolved as the next girl.

Posted at 03:51 PM in This Week in Suburbia | Permalink

Oh, yeah...a male politician would already be ducking the responsibility. I agree, she does have a lot on her plate. I sincerely hope she can manage to live with the consequences of her beliefs about sex education and birth control, but more important, I hope her daughter can live with those consequences, too.
Here's an interesting take on it all, whether you're a conservative or a liberal:
http://www.huffingtonpost.com/bonnie-fuller/sarah-palin-she-has-chose_b_123282.html

Um, Cactus, it's not "beliefs about sex education" that caused little Bristol those "consequences."

You see, when a man and a woman love each other very much. . . Well, you know how it happens. Right?

Politics, policy and party affiliation turn out not to have anything to do with it.

I have to admit I have found myself in a similar "female chauvinist" position a few times, especially when it comes to doing stuff for my kids - it's Mommy's job, right?

But seriously, if it were a male politician with a pregnant daughter, what would the media have to say about it? Remember when Dick Cheney's daughter came out? I don't recall anyone bashing HIM about it as if he had done something wrong or couldn't do his job anymore because there was drama at home.

And can you imagine what the press would have to say if it had been Palin's son whose girlfriend was pregnant instead of the other way around?

I think it's fair to demand that a "family values" politician actually display a devotion to said values within his/her own family.

Although, just to play devil's advocate, Rattling, I have to say that she could have all the devotion to those values in the whole world and still not be able to MAKE her kid do (or not do) what she wants. The thing about parenting is: you can teach them, guide them, show them, lecture them, but at the end of the day, they are their own people and make their own decisions. While I think there are plenty of reasons not to love the McCain/Palin ticket, her daughter's pregnancy is not one of them in my mind.

I agree. I would love to be sure about what she is doing wrong as a parent, but, sadly, it is not my area of expertise, even after 13 years on the job.

On the other hand, you don't have to be a Democrat to cringe at her sneering dismissal of due process rights.

I seem to be the only person in my family who is HORRIFIED that Sarah Palin would want to accept the nomination for VP. Her and her Husband have a ton of things on their plates at the moment, and YES I would be just as upset if it was her Husband who had been asked to be VP!
John Edwards running for president and wasting the last months w/ his wife, horrified me as well........His affair was the cherry on top!
I am not a total "Obama-Maniac" either. I am a concerned voter who believes in taking care of Family first BEFORE Individual pursuits!

I'm done now, thanks for asking!