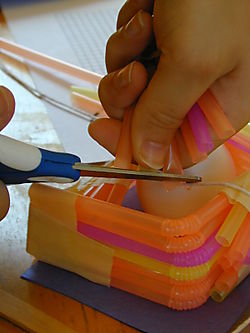 It was an exercise in trial and error, theory and design, engineering and creativity - or what we in the mommy world like to call "actual learning".

What happened to the egg is not important.

First, we research force, impact and gravity. We discuss the scientific principles at work in a UPS shipment of someone's wedding china.

I watch as the fifth-grader engineers a little box for her egg out of bendable drinking straws, some masking tape, string and two pieces of construction paper.

Would it work? Is that really important?

"That's not going to work," her father declares after no more than a glance at our efforts.

I give him a pointed look. "We are going to determine what works through a process of  trial and error," I say.

But now she is suspicious of our design, which like the UPS method, surrounds the egg in a packing material made of snipped drinking straws, with strips of accordion-pleated construction paper for extra cushion.

Her suspicions are not without foundation. A few minutes later, we watch as our flawed design leaves the hard-boiled test pilot cracked like an egg after an eight-foot fall to the ground.

She retrieves her egg, peels off the shell and glumly bites into it. "Tastes like failure," she says dramatically.

Maybe it is time to enlist Daddy's help. "Do you have any theories?" I ask him, trying to emphasize that this is not an invitation to take over.

He interprets this as an invitation to take over. A compulsive do-it-yourselfer with a "This Old House" addiction, it is impossible to get him to see past his obsession with making things that work. What exactly, are the children supposed to learn from that?

He pulls out a chair and picks up the instruction sheet. "Okay, I can do this," he says. He is talking to himself now.

"Maybe you should explain to her," I say.  He looks up as if we have only just come into the room.

"I am arranging the bendy straws so that they are equidistant. So it won't fall out," he says finally. He says something about the strength of triangles, but this is pretty close to the full text of his lesson.

His design, which suspends the egg in the top section of a capsule of straws skirted in construction paper, is ready for its test drop.

The results are, when you really think about it, inconclusive.

"The results with a hard-boiled egg won't necessarily correlate 100 percent with what will happen with a raw egg," I point out, as the fifth-grader beams with pleasure and an unearned sense of accomplishment.  "It's just a trial."

But only for the egg.

Posted at 10:23 AM in Girl Kamikaze, Mother of Invention, What Passes for Parenting | Permalink

Oh dear. This scenario plays out regularly in our house, only I'M THE ONE who plays the role of experiment hijacker.

Ah, I remember it well. She will too, with sentimentality.

Husbands kill any chance of learning. My own prodded me this morning, asking, "Do you approve of the way he's behaving?" I said, "I don't approve of the way either of you are behaving." Now who's in the doghouse without a springy contraption to save my fall?

aargh... I have been accused of bossiness before (an accusation I deny); however, I do like to think that I can appreciate the difference between insisting there ARE better ways to clean a bathroom and allowing a child to figure out for herself better ways to build a gizmo. Perhaps I delude myself, but I will take this lesson to heart so that the delusions do not continue. :)