« It's all about meme | Main | The secret ingredient is vodka » 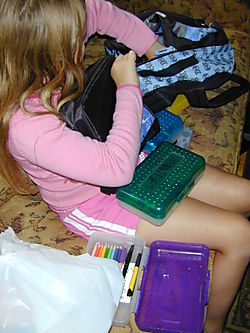 NEW YORK - Investors sent stock markets into flights of exuberance this week in reaction to leaked reports of a fifth-grade school supply list that one analyst described as "truly inspired."

The list, describing a wide range of items specified by both brand and brutally exacting characteristics, (glossy, hardcover spiral notebook with zipper, magnetic and button-closing accessory pockets; 132 pages, $17.99; Coach) is said to require no fewer than three separate retail outings and at least $168.46 to fulfill, including impulsive last-minute folder upgrades.

The report sent the indexes surging as market strategists pounced on shares of blue erasable pens, wide-ruled notebook paper, 8-count bold Crayola markers - but not the thin ones -  and elaborate expandable file folders.

Shares of Office Depot (ODP:NYSE) led the rally, climbing more than $3 in the last half hour on rumors that a suburban mommy in the Chicago area had begun to crumble in her resistance to a skull and crossbones backpack and matching lunch box.

By day's end, it was clear that "off-list" purchases had left investors even further ahead, as consumers found themselves worn down by middle-schoolers who refused to consider existing supplies from the bin in the basement.

"I know what I need and I don't want to use five-year-old, dusty crap," said one finnicky 13-year-old, whose insistence on a faux-leather $34.99 three-ring organizer left the investor relations department at Office Depot hastily adjusting third-quarter projections.

Posted at 09:32 AM in Dateline: Suburbia | Permalink

Ugh, I feel your pain! My 10 year old is horribly picky this year, making shopping a horrendous chore. Next year I'm going to make her shop with her dad...that'll teach her LOL.

This is hilarious. And reading things like this makes me so nervous for when my kids hit school age.

PS Thanks for the tag; I returned the favor today, though if you're not up for another one, I understand. :)

So, I say to my husband, guess what the SK spent on school supplies for her kids this week and he says,"$180 bucks" without even taking a breath. So i say, how did you know that? And he says, " cause that's what we spent on Alex". As feared, The "List" has made its way far past the borders of Illinois....

I escaped relatively unscathed at $139.50, not sure how. Especially since 11-year-old known as "accomplice" insisted on picking out the designer folders with cute animals on them and designer dividers -- DIVIDERS!!! -- with funky cutout shapes and a color palette that looks like a Martha Stewart swatch collage. What's wrong with the good old yellow sheets and colored tabs?