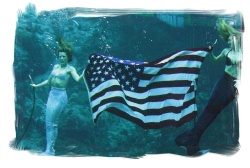 The mermaid show ends in a patriotic tribute; Lee Greenwood is piped through the speakers and a couple of  long-haired beauties in bikini tops and fish tails unfurl an American flag underwater.

The 10-year-old's cousin wants to know:  "Are you proud to be American?"

The question - or perhaps the pressure to participate in a group display of national pride at the behest of mermaids - trips my daughter's contrarian streak.  "No," she says.

But she can't really say why.

"Pollution," is all she can come up with.

Her grandmother is concerned.  She shouldn't say things like that, she tells me.  It's not just that she thinks her granddaughter should be proud of her country - it's that the country she should be proud of has become so intolerant of anyone who refuses to wear their patriotism on their sleeve. Or their lapels.

She's worried her granddaughter could get into trouble.

I try to reassure her that her granddaughter has a pretty good understanding of what makes this country worthy of her pride.  She does dramatic readings of the Declaration of Independence, knows the four clauses of the First Amendment, watched all seven episodes of  the John Adams story and quotes Benjamin Franklin.

And there's still no law requiring you to work up any minimum level of enthusiasm for theme park patriotism.

"Fallon," I say," tell Grandma what it is about our country that makes you feel proud."

"Freedom," she says.  I was hoping for something more concrete, like "rule of law" possibly, but freedom is not a bad start.

This is a girl weaned on American civics,  public television, the New York Times and a bookshelf crowded with founding fathers.

She can do better, I think.

Posted at 08:55 PM in This Week in Suburbia | Permalink

Now who's proud? LOL! I think she's got a perfect handle on what our country offers. I don't know that my answers would be any different.

Once we pulled up to the drive through and my then 4 year old said, Aaahh, McHome.

I think you've just written their next $15 million advertising campaign.

The reason she didn't say "Rule of Law" is because it's a rather remote concept these days. Add some Thomas Paine to her casual reading list and you've got it covered.

lee greenwood is a sign of the apocalypse. i'm just sayin'...