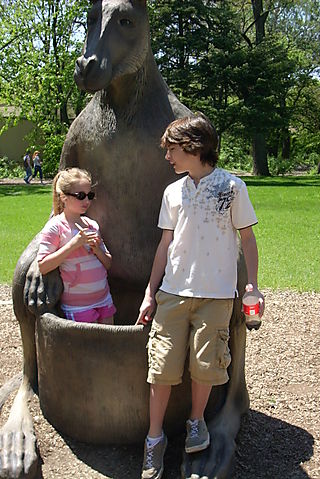 Mommy had to work late. She comes home to 12-hours of pent-up demands.

Daddy was home, but had apparently forgotten to deactivate his cloaking device. He was invisible to the children.

They are hungry. They are irritated. But mostly, they are poised for war.

They have been waiting patiently all day. An extra cell phone has been charging on the counter in plain sight. A tactical error on the part of the adults. All day long the children have been stealing glances at it, touching it, running their sticky fingers over its display. Now it is time.

The fourth grader rushes to be first.

"Mom I should have the extra phone because I am younger and I will not lose it and that way I can call you and tell you where I am and can I have it?"

"Whoa," says their mother, waving bags of fast food at them. "Who said anything about either one of you getting a cell phone?"

They are not distracted.

"I am the only 13-year-old in the world without a cell phone."

The fourth grader accuses him of exaggeration. He accuses her of being obtuse and explains, in his you-are-an-idiot voice, the concept of hyperbole. "I am exaggerating a little bit to make a point," he says, drawing out the syllables in "exaggerating."

Well played, thinks her mother. But she does not yet realize that they have begun an argument that will play uninterrupted for the next 45 minutes, from her very first bite of fast-food salad to the last. (Which, as long as we are playing for sympathy here, I will tell you, was the first thing she had eaten that day.)

That was yesterday. Today, she will spend four hours sitting between them on an airplane, on a trip that the middle-schooler has already declared is "stupid" and a huge imposition on his summer schedule, which as far as his mother can tell, is devoted to one long argument. (Why doesn't his sister have to mow the lawn? He has too been practicing his violin. Why can't he have a cell phone?)

The fourth grader can sense the mother's mood. Which is to say she senses opportunity. She will audition for the role of Most Likely to Be Given the Cell Phone.

"Let's have a truce," she suggests sweetly.

Her mother raises an eyebrow hopefully. Her position on sucking up is that it should be encouraged.

But Boy Esq. has already found his angle. He position on truce is that it should be avoided.

"I get the window seat."

Posted at 12:29 PM in Dateline: Suburbia, This Week in Suburbia | Permalink

Ha! Great post. Those are some fine arguments. I think you need a reality show. I want to watch all this as it unfolds from the comfort of my (quiet) couch.

Fine, give her the phone, says me. But while we're negotiating, he gets a driver's license on his legal driver's license birthday (I got mine at 14. I feigned being a farm boy) and the keys to the car, no questions. She can use her cell phone to BEG HIM for a ride. Let’s start the forward looking possibilities now.

Yep, sucking up is good.

I just bought a pay as you go phone, I charge it and give it out as necessary to which ever kid needs it at the time. If they're together the thirteen year old gets it though. Fair? Nope, but that's life here.

Almost the same here yesterday. Husband came home with a new Blackberry. So his 'old' phone was up for grabs.

There was an all in cat fight with the Damn Emos. Like seriously, I haven't seen them so animated in months. Not since the 'last square of chocolate and both had their period' fiasco of April 08.

The war is not over. Hope yours is.