Was it good for you?

This is Charla Muller. She is a very busy woman.

She is so busy that she couldn't even find the time to run out to Brookstone and buy a giant remote control for her husband's 40th birthday.

She was forced to improvise. She came up with this: She promised to have sex with him every single day for a year.

Personally, I would have had the kids glue something together with popsicle sticks and glitter paint. You can't go wrong with children's arts and crafts for last minute gift ideas.

But for whatever reason - maybe she was out of craft glue or maybe she just panicked - Charla went for broke.

It might have ended there. Charla Muller could have reneged. Assuming her husband is not a contract lawyer, she could have tried to impose terms after the fact. She could have simply put out day after day after day, and kept it to herself. 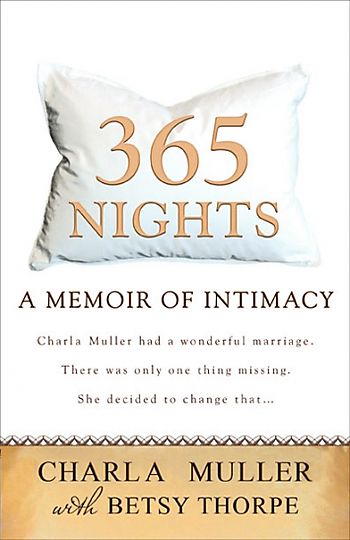 But no. Charla Muller decided to write a book. Now the rest of us will spend the rest of the summer subjected to an endless conversation about how many times a year everyone else is having sex. Like sexual slackers Annie and Douglas Brown, who managed only 100 straight days of domestic relations before throwing in the sticky towel. But still managed to score a book deal.

Muller describes her year of sexual profligacy as "a really meaningful lesson."  Ouch.

Who does not cringe for Mr. Muller upon reading that?

Douglas Brown says the experience left him with "less of a sense of having to perform."

Really Douglas? Because complete strangers are now going to be asking your wife if you are any good. And we will know if she's faking it.

Posted at 09:14 AM in Date Night, Sex in the Suburbs | Permalink

80% chance Douglas was thinking of power tools 20% of the time.

A memoir of intimacy??? I can't even begin to think about how very unintimate it would all become after...oh, say day 50 in a row. And I'm being generous there, b/c truth be told, I don't know if I have much more than 2 1/2 straight weeks in me.

Ok, maybe in the first year of a relationship you have sex every day because it's all so new and intimate and exciting and fresh ... and no one is trying to make babies, or feed babies, or get up early for a big meeting before the promotion, or whatever. But PUH-LEEZ, this memoir makes me tired just from the title. I can't even imagine the "headache" I would get from reading it. And I love my husband, honest I do. But that Father's Day present has a secret little "I smell a book deal in the making" thought behind it all the way...

So what did he get for his 41st birthday? A break?

She should have had a Double Secret Escape Clause built in -- that if HE reneged, even once, the whole contract was null and void.