Born Free, then raised by fourth-graders 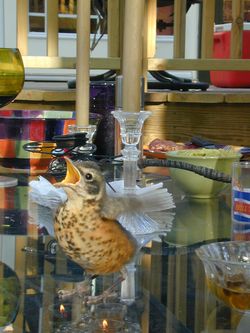 We never knew what became of Tweety's mother. Perhaps she was killed while defending her offspring from game wardens investigating reports of a man-eating robin.

We knew only that he, or possibly she, arrived on our doorstep orphaned and then rescued - or possibly kidnapped - by a trio of 10-year-old girls, upon whom he depended for his very survival. They named him, fashioned what they believed to be a cozy home in an old rabbit cage and took him under their wings.

Nourished by round the clock servings of cat food, administered with the frequency of foie gras feedings, he seemed to grow more plump by the hour.

It wasn't long before Tweety had become part of the family. He hardly seemed to know he was wild at all. He perched on our fingers and allowed us to ruffle his feathers. He was becoming dangerously dependent, and we knew the time had come for us to reintroduce him to life in the suburban wilderness.

It was his only chance.

"We could teach him, train him," I said in a slightly hysterical English accent. "I can't let him be caged for the rest of his life!"

And so we set about teaching him the skills he would need to survive. Flying came first. The girls tossed him repeatedly into the air, shouting encouragement as he flapped and fell, crashed and took flight again. And though it seemed he would not survive their enthusiasm, Tweety eventually learned to fly short distances from fourth-grader to fourth-grader.

But no matter how we tried to tempt him, he seemed to have no taste for anything but cat food on a stick. We feared he would never learn to catch a worm, let alone kill a warthog.

Still, we had to try. "He was born free and he has the right to live free," I said, my voice rising once again in English-accented hysteria.

We began leaving him out of the cage for longer stretches. We reduced his feedings. We set him out on the grass among the other birds.

Eventually Tweety began to realize that there was another life out there for him, a life free and wild, as he was meant to be. At least Elsa did, if Joy Adamson is to be believed. It is difficult to know what a robin realizes.

Then one day, it happened. Tweety flew off, and though I was dreadfully worried he would be trampled by an elephant or possibly a middle schooler, I knew we had done the right thing.

That evening, we suffered all the agony of Joy and George watching Elsa navigate the Kenyan plains. Could Tweety fend for himself? How would he eat?

"Oh darling," I said to my husband. "Suppose we never see him again? Suppose tomorrow night I wear the pajama bottoms and you wear the tops?"

But as it turned out, we saw Tweety again that very same evening. We were dining on the patio, when he suddenly swooped down out of a pine tree and landed on a dinner plate, demanding to be fed.

I must admit, I was overjoyed to see him. He looked well, if a little thin. "Oh Tweety," I said.

He repeated this performance at breakfast, and then again every two to three hours throughout the weekend, fluttering onto our heads or the backs of our chairs with a high-pitched chirp, his head thrown back and his beak open wide.

Once I found him perched atop the roof of the  Sonata. "Tweety," I said, "You can't come to Nairobi with me. We are in Chicago and I'm only going to the grocery store."

He flew off obediently. But he didn't go far.

This morning he appeared on the back door welcome mat, looking irritated because we'd slept in. His chirping was a touch hysterical, though I couldn't place the accent.

Had we failed? Would Tweety ever be as free as the wind blows? Or at least as the grass grows?

I couldn't be certain. But I knew this: We were going to need more cat food.

Posted at 05:39 PM in This Week in Suburbia | Permalink

This entry made me smile! Is that Tweety on the first picture?

As much as we love the idea of birds living in our house, I totally agree with you that they are meant to be free. :)

Thank you for sharing this lovely story!

I think there is an old proverb that says, “If you catch an injured bird and take care of it and then let it go, if it comes back to you it belongs to you, if it flies off, you never had it to begin with.”

Here is a link for your young Florence Nightingales: http://www.birds.cornell.edu/AllAboutBirds/BirdGuide/American_Robin_dtl.html
Perfect time to get them interested in birding. They can start their life list with the young Robin.
(Does Rattling the Kettle have a wine recommendation to go with those cooking instructions?)

nthnglsts, I would recommend a light-bodied red wine, perhaps a Montepulciano, which would tend to not overwhelm the delicate flavors of the dish. Remember, you're looking for balance, not necessarily the biggest flavors.

Now I am starting to wish we had been feeding him better cat food. Or maybe just a blend of fresh herbs and spices.

I bet Audubon Ron has a good recipe. He loves birds.

Here's a thought. Perhaps he isn't leaving because, oh, I don't know, all the other available cat food in the neighborhood comes with its very own cat sitting placidly by the bowl..waiting? I could launch into a whole metaphor about fundamental pre-teen parenting skills here, but really, right now, I'm thinking Montepulciano? Someone seems a bit too familiar with the whole small bird as an entree section of the book store. That's right, I'm looking at you RTK. LOL! And both of you leave poor Audubon Ron alone! The man has ducks to feed and you can bet he isn't fattening them up with wolverine chow. CAT FOOD! What were you thinking?

Cat food. I have seen the enemy and he is ME.

"let alone kill a warthog" left me shaking, silent laughing, and clutching my stomach (which is a bigger job than I like to admit).