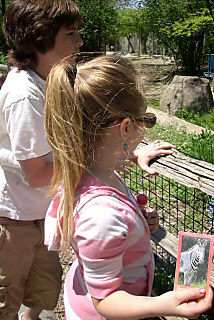 There are two kinds of zebras, distinguishable by size, markings and habitat.

The fourth grader gives herself a point for spotting the zebra on her zoo card. It is Equus grevyi, Grevy's zebra, whose stripes terminate in an all-white belly. Grant's zebras are smaller and have stripes that go all the way around.

But we are taking it very seriously, because otherwise we would just be enjoying a day at the zoo like normal people.

First, we stand at the sign in front of the zebra enclosure for a really long time. The zoo wants us to guess. "Which type of zebra do you see?" But we're not going to start awarding points on the basis of a guess. That would be anarchy.

"Grant's zebras," the seventh grader announces to his sister. "Zero points for you."

"They are not," says the seventh grader, in a voice you might use to point out a zoo animal to a preschooler. "Look at them. They do not have white bellies."

He reads the description of Grant's zebras from the sign, in a too-loud voice that suggests his near-constant frustration at being the only spark of intelligence in a family of idiots. "They are Grant's," he declares. End of story.

The fourth grader pretends not to hear. "One point for me," she sings.

I have been given the card for Hyla gratiosa, the barking tree frog, and have no chance in this game. But rules are rules, even if the deck has been stacked and even if no one knows exactly what the rules are.

But they are too engrossed in a discussion of mammalian classification to pay any attention to me. The discussion goes like this: 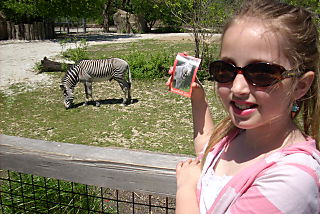 I try de-escalation. "What do they mean by 'white' anyway? Their bellies are mostly white, but you can't really tell where the stripes end."

The seventh grader suspects I am pandering. He shrugs his shoulders in disgust and stalks off to the next habitat.

Which turns out to contain a single Grevy's zebra, much larger than the previous zebras, with an obviously white belly and - perhaps most significantly - a sign in front that reads: "Grevy's zebra."

They are the largest type of zebra, weighing up to 990 pounds. They don't hang out in herds and unlike other members of the horse family, our zoo card tells us, "the only strong social bond is between a mother and her offspring." But how do they get along? I wonder.

The boy we call Boy, Esquire is never going to let this go. He is only briefly distracted by the possibility of a new argument called addax or ibex? He will still be crowing about zebras on the drive home, "Just say it," he will repeat more than once. "Who was right and who was wrong?"

The girl doesn't care. Either way she wins.

Posted at 07:09 AM in This Week in Suburbia | Permalink

This is a great story -- and I'm pretty sure it's going to be my life once my daughter starts speaking in full, complete sentences, as it's already starting now, and she's only two. "Mine!" "No, mine." "Brother take it ME!" "shriek" "growl" etc. etc. At least the debates in your family are more intellectual and don't degenerate to animal noises. :)

You say Grevy's, I say Gravy's.

I have BEEN THERE, my friend. My Boy and My Girl engage in mental jousting deathmatches over the most inane of topics...

You're lucky. The debates in my family START with animal noises.