« The Corn Whisperer | Main | A brief history of no time »

A Tale of Two Mommies 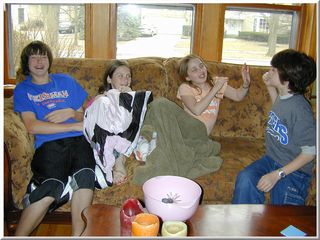 But I am getting ahead of myself. And so I shall go back to the beginning:

They were journalists of vastly different talents.  One was the "creative" type - a constant source of colorful stories, many of which - much to the disappointment of her editors - were strictly for in-house entertainment. The other was a hard-driving, management-bound overachiever, whose long hours and can-do attitude on the bankruptcy court beat endeared her to her supervisors but didn't exactly make her the life of the office party.  (Sure, we'd love to hear more about new operating capital provisions under chapter 11!)

Even so, both found love in the newsroom, and in 1994, found themselves in a family way.

Three days apart in 1995, there were baby boys, who could not have been more perfect.  Baby girls soon followed.  But here, their diaper bags diverged.

Management Mommy took what, at the time, seemed like the harder road.  She headed back to the office, polishing her credentials all the way to the big office and the executive paycheck, relying on childcare, housekeeping and a variety of other outsourcing arrangements.

The story teller opted for what she liked to call "actual parenting,"  a selfless and noble undertaking which, as she frequently reminded Management Mommy,  was in no way morally superior, but which she nevertheless described in a superior way, even while also employing the services of a part-time nanny, a cleaning service and a figure skating coach.  Because her children meant everything to her.

Each sought to reassure the other.

"Maybe you won't have enough money to send your kids to college,"  Management Mommy would say. "But at least you had all that time to read stories to them when they were little."

"I am sure she is just going through a stage," Creative Mommy would say. "It probably has nothing to do with the fact that she doesn't see you until bedtime."

And so it went, year after year,  a tiny slice of the ongoing social experiment known as  "Mommy Wars."  Because what is the point of making choices if you can't make someone else's choices seem wrong?

The boys are teenagers now, the girls are in their final years of elementary school, and it isn't hard to see the results.

At least it isn't hard for me, because, as usual, they are all in my house, wrecking my furniture and leaving sticky cans of half-drunk soda in the bookshelves.  Management Mommy is traveling on business and staying in fancy hotels where, presumably, the floors are not covered in chocolate syrup and fireplace ash.

The girls are plotting some new kind of mischief, having not yet exhausted the possibilities of homewrecking with their fire making, arts and crafts and cosmetics experiments.

The boys'  faces are frozen into unconvincing expressions of wide-eyed innocence.  From questions about egg shells on the front porch to Rice Krispies in the couch cushions, they answer every accusation with an equally unconvincing "Whuut?"

They are a handful, these children, and when they get together they are more trouble than the sum of their parts.   They are sneaky, dishonest, expensive and messy.  Also loud. They destroy every room they enter and their standards of personal hygiene are, to be frank, not really standards at all.

How is it possible that they are all like this?  Which side gets to chalk up the win?  I have to admit I cannot say.

But I do know this: something is going to be spilled. Photos: The best of kids, the worst of kids.

Posted at 07:13 AM in Ask the Suburban Kamikaze, What Passes for Parenting | Permalink

I, too, loved this post. I kept thinking, Oh, that's a great line. But then there'd be another and another.

I don't have clearance rack shoes. I have slippers.

Just out of curiosity, which mom do the four kids like best?

That's not a fair question because Management Mommy buys them concert tickets. She plays dirty and she plays to win.

I guess they don't call it "war" for nothing.

I think Overachiever Mommy would have won, had she been entered at the time...

There is no question that she should have been in charge of raising them all, but I believe her patented "Look of Disapproval for Performance Below Expectations" would take her out of contention for any popularity-based awards.

Yes, I guess that would be true, but had she been in charge the kids would have grown up eating sushi, goat cheese, arugula (and pop tarts) all this time. Perhaps not at once.