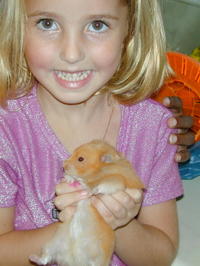 The peddlers of parenting advice are always going on about consistency.

I used to think they were right.

Then I changed my mind.

Then I thought about it some more and realized maybe they had a point.

Now I am not so sure.

Anyway, I guess what I am saying is that consistency is all well and good if you happen to be one of those parents who consistently judge their children's capacity for evil with a reasonable degree of accuracy and foresight.

I have never been able to keep up with my children's morphing inclinations.

When my daughter was still just a rosy-cheeked kindergartner, she had the kind of face that gives rise to the expression "wide-eyed innocence."   She also had a firmly developed sense of style and did not succumb willingly to my fashion choices.

Her brother, three years older, had no particular style but was a fan of consistency, which to him meant wearing the same shirt to school every day.

Back then I was still naive enough to stock my kitchen with groceries and buy cookbooks with titles like "5,000 Healthy Meals Your Children Will Actually Eat."  Burger King was a rare treat.

So I made a deal: I would take them to Burger King for dinner in exchange for guaranteed dressing rights on picture day.

My daughter agreed immediately. My son was torn. Burger King was the Holy Grail of dining out, but wearing the clothes I selected was almost too high a price. It was an agonizing decision.

I lost patience, lavishing praise on the wide-eyed girl for her cooperation, chastising the boy for always making everything so difficult.  Finally, he agreed. We went to Burger King.

The next morning, the boy steeled himself and managed to crawl into the hideous, intolerably uncomfortable  shirt I'd put out for him.  The wide-eyed girl came out wearing one of her own ensembles. It was what she had planned all along.

It wasn't cooperation that had led her to agree to my terms so easily. It was Lack of Integrity.

She never had any intention of wearing the clothes I'd laid out. My son was slow to take the deal because he knew he had to live up to its terms. I had criticized the right behavior and praised the cunning, conscienceless child. I was furious.

But the wide-eyed girl had me and she knew it. There was no time to change. "I had my fingers crossed," she said.

One the way to the bus stop she asked me if I would carry her little toy hamster back home. She'd fallen in love with the little guy the second she'd found it in her hamburger meal. But she wasn't allowed to take toys to school.

"Sure," I said, still seething over her deception. "I promise I won't leave it at the bus stop."

Just as the bus pulled away, I dropped "Hamtaro" into the dirt. Her friends on the bus gestured to me frantically, thinking it was an accident. But the wide-eyed girl just stared back from her seat. She knew what had happened.

Cruel? Maybe. But there are worse things than cruelty in the hierarchy of parenting sins.

Half an hour later, I struggled with guilt, remembering how she'd tucked the little hamster into bed the night before. I walked back to the bus stop. I knew I couldn't pick it up. That would be weak.  I would just cover it up with some leaves so no one would take it.  It would still be there when she got home.

Driving out an hour later, I had to pass the bus stop again. I couldn't help myself.  (She had made it a little bed with a tiny pillow and everything...) I stopped my car in the middle of the road and rescued the plastic hamster.

Later that afternoon, I am on the phone with my friend, the child psychologist. I have to put Hamtaro back in the dirt, she tells me. Otherwise, the wide-eyed girl will never  take me seriously.  Even cruelty is preferable to inconsistency.

And so, what choice did I have?  I made four trips to the bus stop that day, to drop, cover, retrieve and finally replace a plastic happy meal hamster.

In the name of consistency.

Photo: Wide-eyed girl and a hamster of little mind.

Posted at 02:32 PM in What Passes for Parenting | Permalink

Here's the thing, SK: Embrace your inner "Because I said so."

It feels SO good.

Now why didn't I think of that? Yes, I am embracing parenting by Walt Whitman: "I am large, I contain your inheritance."

Oh, this must be the greatest parent-angst post EVER! Or at least this week!

Burger King AFTER deal is met. If I feel like it. Because I said so. Nyah nyah. Okay, I suck, but I sleep at night.

And WHO does her highlights? They're DIVINE!

I remember my parents had a system, rules were different for each child (all five of us), but the rules governing each child were consistent.

When comparisons between different children's rules were made accompanied by "but muuuuuum its not fair" she would just calmly state "fair is not everyone getting the same deal, fair is everyone getting what they need".

To this day I am wary of anyone who tells me something is fair.

I embrace the crazy side of parenting.

Keep crazy just beneath the surface. Give them a glimpse every now and then. Just enough so that they are... dare I say it... scared.

Is there a reason someone isn't paying you to write this thing yet?

Someone should. Seriously. You crack me the hell up.

i agree w/ miss brit.
but its so funny/sad that she thinks you would just toss away her toy, and you really thought about it a great deal. mr lady is right also. well everyone