I am sliding my feet into shiny stiletto heels 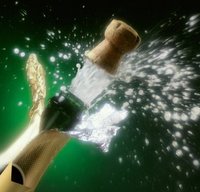 when I hear the unmistakable sound of the cork leaving the bottle.

I am lying in bed atop a pile of used Kleenex when I hear the unmistakable sound of my family fighting over the remote control. It is eight minutes into the new year.

I come downstairs, rhinestones tossing off rainbow glimmers in every direction, heels tapping between the swish of black taffeta.

I clomp downstairs, bathrobe pockets spilling wadded-up tissue in every direction. A day spent blowing my nose and doing NyQuil shots has left me with dark-rimmed eyes, red nose and hair gone wild.

His eyes roam admiringly from ankle to bodice, leaving no rhinestone unturned.
“The children are asleep,” he says, arching an eyebrow to suggest the possibilities. “And the champagne is cold.”

He looks up from tossing the couch cushions and takes in my appearance. “Nice hair,” he says. The children look at me for a second and resume their bickering. “You had it last.” “Did not.” “Did so.”

He tips the bottle into the mouth of the flute he holds in his other hand and pours.  “To men in tuxedos,” I say, taking the glass from him with an appraising leer.

“It will turn up,” I say to my family, who appear not to hear.

“To women in black,” he responds, returning the look.

Posted at 02:45 PM in Sex in the Suburbs, This Week in Suburbia | Permalink

I didn't know we had the same New Years! (Mine was with a bit more bathroom cleaning though. Sigh.)