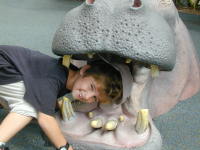 Most days, it seems as if he would rather I wasn't around at all.

I am treated like a thing to be avoided; an interruption, the bearer of demands, threats and rebukes, which is what I am.

In public, I am a source of embarrassment.  I have to dig in my purse for the receipt with the number for picking up our order at the fast-food counter.  What difference does it make?  We are the only ones standing here.  The teenager behind the counter doesn't care.  But my almost-teenager rolls his eyes in shame.

We are as mismatched a pair as ever ended up in the same family, I think.  He is a straight A worrier who turns homework in early.  I am always pointing out the rules that make no sense.  I ask a lot of questions of the people in charge.

At home, he turns this back on me.  "What difference does it make if the television is on when I do my homework?" he says. "I am making straight A's."   Stumped, I can only revert to autocracy. "It's my rule," I say. "Period."  This sounds lame, even to me.

We are in new territory these days, in some space between what used to be and what is coming.

There are moments that encourage me. We talk about the books we are reading. He is excited about an Agatha Christie mystery that I loved at about the same age. He slips me an algebra test his teacher has graded with exclamation marks.  He tries not to smile.  We are both proud.

And even as he cringes with the fear that I will ask too many questions, he wants me at his school's Open House. He wants me to meet his favorite teachers. But he wants me standing in front of the school when they open the doors. "It's from 7 to 9,"  I say. "That doesn't mean you have to be there exactly at 7 o'clock."

He clenches his fists in frustration. He is picturing me walking in; the very last parent arriving in a room full of seated adults who will all turn to  look at me, shaking their heads as I disrupt some solemn presentation.  "Open House is not like that," I say.  But this is not an area in which I am trusted.  There may be some justification for this.

My purse is stuffed with things like a week-old receipt for hamburgers.

Not so long ago, he was 5, and packing a Pokemon backpack for a weekend at the beach. Every compartment and pocket was stuffed.  There was a rubber grasshopper, two rubber lizards, 13 stuffed animals, four seashells, 11 polished rocks,  five ordinary rocks, a small grey plastic cowboy, a small red plastic Indian, a handful of plastic dinosaurs and zoo animals,  a bear-headed miniature magic wand party favor and five marbles.  No bathing suit, no clean clothes.

I drew the line at the rocks. "You cannot bring the rocks," I told him. "Leave the rocks."

Soon, a friend tells me, he will have a mustache.  See that little shadow?

Posted at 10:16 AM in Boy, Esq., What Passes for Parenting | Permalink

I've been cruising around the mom-blog circuit, and you are the first tween one I've come across. I will SO be back.

Come back any time. And bring one of those sippy cups for me. We are going to need it....