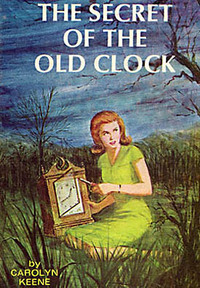 "Why, of course I will read!" the mother said gaily to her nine-year-old daughter. "What fun this will be!" she said eagerly.

The two settled in for a cozy evening with a small, faded yellow book, plucked from the shelves with nostalgia and enthusiasm.

"This was one of my favorites when I was about your age," the mother exclaimed excitedly as she opened the cover to begin the story of the convertible-driving girl detective with an unmatched skill for sleuthing.

"You will certainly enjoy it," the mother remarked earnestly, gazing intently at her daughter, who was comfortably arranged under the bedcovers awaiting the story.

But before they had reached the end of the first chapter, an unpleasant realization had begun to settle over the mother.  "Oh dear," she thought to herself, turning the pages more and more reluctantly.

Had she misjudged her childhood powers of literary discernment?

For even as the feisty blonde sleuth from River Heights qualified for the golf tournament, reeled in a handsome, red-headed tennis champion for her dinner date and fearlessly solved the Secret Mystery of the Hidden, Haunted Staircase Bridge at Lilac Ranch Farm, the truth was becoming more and more clear.

This book was dreadful!

She was trapped!  Having fondly recalled for her daughter her affection for the exploits of the brilliant only child of the brillliant criminal defense lawyer Carson Drew -  Nancy, who was both smart and attractive, modest and popular, brilliant and kind, fearless and clever and who never, ever had a bad hair day - now she would be forced to read them all!  Out loud!  With each creaky adverb flinging itself urgently, wickedly and indifferently into every exhortation!

Posted at 10:11 AM in Not Now, Mommy's Reading, What Passes for Parenting | Permalink

I felt this exact same way recently. And, by the end of a couple of chapters, seemed like my daughter was thoroughly bored anyway. What a letdown.

You are not kidding... Nancy just does not hold up at all. At least we know Keith Partridge will never let us down, right?

I think you are all being too hard on poor Nancy. It's not like she had forensic experts at her beck and call. She did the best she could. Of course, I never read her as a kid and, thankfully, my daughter jumped right past her. Looks like I dodged a bullet.

oh. my. hell. the only thing worse now are the permutations of ms. drew. my 8 year old begs me to read nancy drew and the clue crew. can you say awful but geared toward the 1st and 2nd grade set?

but, here's something fun for next time -- check out the clarice bean books by lauren child. the chapter books. i actually want to read them again.

and for xmas (thought she's got a halloween book as well)? an oldie but goodie that cracks me up (and i'm a nice jewish girl) are barbara robinson's books, especially "the best christmas pageant ever." still holds up. i promise.