The Secret Ingredient is Spite 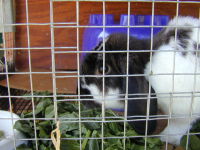 It was an accident. I understand that. It's not as if I went into this whole parenting thing thinking nothing would ever get broken.

Besides, you had no way of knowing that when you aimed your industrial-strength rubber band across the room it would land across the base of the candle holder, forcing you to snatch it back, causing it to crash in pieces on the floor.

Same goes for the picture frame in the stairwell and the photo stand on the shelf.  If your sister's stuffed animals weren't meant to be hurled from the second floor balcony, then I don't know what second-floor balconies are even for. And I never would have made such a big deal about the chip in my picture stand if I had known that a few projectiles later the chip would be just one of a million little shards of glass on the kitchen floor.

But I have to say, this morning's provocation has left me out of patience. And spinach.

Because not only have we had this discussion before, repeatedly - but I believe that our most recent conversation on the topic of which salad greens may be fed to your bunny took place as recently as yesterday.

Still, I did not want to take the chance that another bag of designer lettuce would end up in the rabbit cage.  So I cut the broccolli stalks and the celery leaves and the carrot tops and put them in a bag on the counter, very near the spot that you would pass on your way out to feed your pet.

But somehow, when I wasn't looking you took a brand new bag of baby spinach out of the refrigerator instead. Then you emptied the entire bag into the cage because it would have been too much work to have to put some of it back.

Now here I am staring at a recipe for feta and spinach tartlets, which I had planned to make today. I have fresh nutmeg,  heavy cream, real feta cheese, a jar of pine nuts, pie crust dough and a taste for revenge.

And so I will follow the example of inventive cooks everywhere. I will substitute. Something of yours. From one of your many treasured collections.

I am thinking of trying a sauteed mixture of shredded baseball cards and foreign currency.

It may not taste as good, but I believe it will be very satisfying.

Posted at 06:18 AM in What Passes for Parenting | Permalink

What kind of suburban housewife article does not include the recipe? Are you using puff pastry or simple pie crust dough? Is it the recipe with the yogurt or without? (I have to make something in a hurry for a dinner party tonight) And really, in your neighborhood, the rabbit would be ostracized by his peer rabbits if he didn't get the designer spinach. Carrot tops indeed! What would the other rodents think?

Where do you think you are epicurious.com? And I prefer the term suburban dilettante, if you don't mind.

Nevertheless, due to reader demand, I have added a link to the recipe for Feta and Spinach Tartlets With Spite.

Now, off with you. I have no intention of turning this site into a repository of useful information.

Adding one more entry to Liz's list of literary appellations...Cooking With Spite. (Note to editor, may be confused on bookshelves with very popular Cooking With Sprite titles)