25 Reasons Why You May Not Reach Silver Anniversary 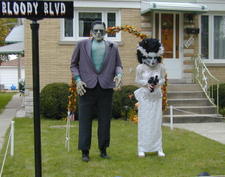 "Don't stock up on silver anniversary cards. More than half the Americans who might have celebrated their 25th wedding anniversaries since 2000 were divorced, separated or widowed before reaching that milestone, according to the latest census survey..."

1.  Dirty clothes left within inches of laundry basket once too often.

2.  Failure of toilet paper manufacturers to include instructions on replacing the roll.

3.  She needs your closet space.

4.  Your midlife crisis + her new breasts.

6.  That tattoo on her ass looks suspiciously like name of her new intern.

10.  Accidentally put car into reverse while he was behind it, ironically validating his mockery of your driving skills.

11. Legalization of same-sex unions really does threaten your marriage by making your lifestyle and furniture choices seem un-fabulous.

12. His failure to appreciate complex relationship between shoes and mental health.

13. Her failure to appreciate simple relationship between sex and everything.

14.  One too many cracks about her family.

15.  One too many members of his family.

18.   "You have to be smarter than the raccoon" remark made in response to her complaint that she has had to pick up strewn garbage at 6 a.m. three days in a row.

20.  Vast socio-cultural chasm between 15-inning Cubs game and her idea of a good time.

24.  Failure to anticipate diminishing appeal of classic sexual advance: "Are you asleep?"

So darn funny. Even though Bossy couldn't relate. No, not at all...

Thus the benefits of a somewhat more traditional division of marital duties, such as Jo and I enjoy. In our marriage *I* have to be smarter than the raccoon.

Screaming, riotous laughter!! Entirely too true. I needed that, thank you!