The Right Shade of Green 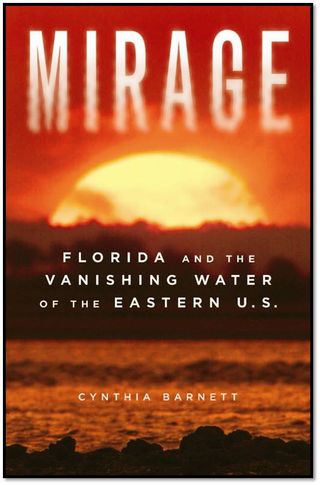 Florida author and killjoy Cynthia Barnett is everywhere this week, telling us that our Water Happy Suburban Lifestyle is coming to an end.

Puh-leeze. Just because times are a little dry we're supposed to believe that it's a bad idea to flush our toilets with drinking water? To allow beverage companies to suck millions of gallons of spring water out of the ground for free so that they can resell it in cute little bottles at 10,000 times the price?  To plant acres and acres of grass in places where it will eventually require the lion's share of the public water supply to keep it alive?  To open our arms to every developer with a dream of shoehorning in another 10,000 rooftops in developments named for whatever natural amenity was destroyed to create them?

Look around Cynthia. Florida is surrounded by water, sitting on water and deluged with water on a regular basis. It would take decades of profligate overuse and short-sighted public policy to bring a place like that to the point of ... okay, well, maybe you have a point.

But reading your new book, "Mirage - Florida and the Vanishing Water of the Eastern U.S.,"  just made me homesick. I couldn't put it down. It is a postcard to all things Floridian, except that you forgot to include a recipe for authentic Cuban mojitos and a picture of sunburned beachgoers wearing thongs.

Where else can you find the same combination of environmentally-sensitive terrain, insatiable developers and swampland hucksters, spineless public officials and Midwestern retirees in golf carts policing such things as whether your grass is the right shade of green?  Seriously. You can get a ticket.  (Page 39)

But that is the Florida I know and love.  There is no better place to be a journalist or a developer.

There is also no greener state. It's just that the green is the money to be made from convincing public officials that what the state really needs is one more massive planned development on the edge of the Everglades. Let's call it "The Preserve."

So the state's drinking water is disappearing into golf courses and fancy little bottles.

There's still plenty of ice for the mojitos, right?

What an incredible honor, to be the subject of Kamikaze Mommy’s wicked wit and dead-on words. But this post brings up *the* question I have long wanted answered about Suburban Kamikaze. I know you wrote about me because I read your blog ... but what of your chump neighbors, those of the this-is-for-real Christmas ornament exchange and the pistachio salad? What of the creepy Old Fox? Do they know you’re a blogger, and even better, that you’re blogging about them? If not, what if they find out? Will you have to pack up the thankless children and move to a new suburb? Hope you will devote a post to this question someday. Thanks, KM, and we sure do miss you back here in Florida.

Dear "Cynthia" - if that is in fact your real name:
Safely ensconced in my clever pseudonym, what repercussions need I fear? There are contributors to this site who have entire news staffs working for them, and yet remain safely unattributed. Journalism is not what is used to be...