The United States of Third Grade 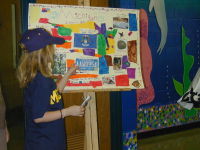 *Thomas Edison's face is carved into Mount Rushmore, right next to George Washington's.

*People in Alaska don't have as much fun as people in the United States.

*The population of Texas is 60 million and something.

*Rosa Parks was in a bus accident in Alabama.

*Some state legislatures have way too much time on their hands:   At least two have designated a  state spider...

Photo: "What Are They Really Up To in Michigan?" -  A Junior Kamikaze exclusive report. 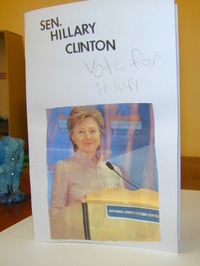 There is much we don’t agree on in this house.

Mr. Kamikaze and I, for example, have profound disagreements about economics and algebra. How much should a pair of shoes cost? How much sex is enough? What is the value of X in the equation Y = (2x – 1) when Y is the number of times other people are having sex?

But when it comes to politics we are almost perfectly in sync. We are both longtime adherents of the political philosophy that a population that has stopped reading newspapers cannot be trusted to run a democracy and that Bill O’Reilly is probably dumber than Rush Limbaugh but more sincere.

We are also - despite constant exposure to the kind of journalism that still depends on meticulous, first-hand fact gathering and a generous skepticism of authority - still ridiculously idealistic about the kind of people who should run our country. It matters. Even if any one of them would be Thomas Jefferson next to the people they will be replacing.

So we don’t take these things lightly. We read a lot and we argue a lot and the jury is out for a very, very long time.

So we were a little surprised to learn that for some members of our family, the question had already been settled. Our 9-year-old daughter has come out for Sen. Hillary Clinton.

There is no question that novelty is a factor here.  As strange as it seems to those of us who grew up knowing that a woman would be president any day, it’s an idea whose time has rolled over yet again, for a whole new generation of girls to take for granted.

"My parents say that I could be the first girl president, but not anymore because of you," Fallon writes in her very first presidential endorsement letter.

(Did we really say that? For cynics, we can be such saps…)

But it seems that our third-grader, a declared candidate for student council, has taken character into consideration as well. "You seem like a good person from what my parents have said about you."

Also she has an agenda: "If I were president I would give a whole lot of money to the people with cancer… and I would stop the war and take our soldiers out of the war so that we could live in peace."

It is hard to argue with that. But of course things are never as simple as they seem when you are nine.

Though it would a tough point to drive home in a room full of people who despise Hillary Clinton for reasons that are no more complicated.

We have, as Garrison Keillor wrote recently, "a long way to go."

"One of Clinton's visible assets is the army of enemies she has accumulated, the carpet-chewers of AM radio and the right-wing trolls who go berserk in their webby caverns whenever madame comes trotting over the bridge. One could not hope for better enemies. It is like playing softball against drunks. They illustrate everything about Republican dominion that the country has come to loathe, the blithering arrogance, the cynicism and corruption, and this wretched war that drags on and on." --Garrison Keillor, Tribune Media Services